Posted on July 1, 2011 by Chuck Coty
I constantly receive articles, emails, and videos extolling the virtues of Israel while impugning the legitimacy of any and all facts to the contrary. Be that as it may, I think we need to at least attempt to separate the political reality from what I believe are false Biblical assumptions.  We ought to make a distinction between the modern day nation-state of Israel from biblical Israel. Only then will we be free to make rational political judgments. 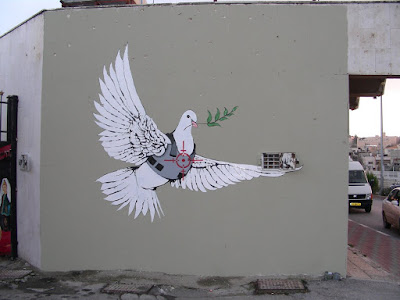 Within the Christian community, it always seems to devolve into an either/or ultimatum. Either we unequivocally and unabatedly support Israel, OR we aid and abet the Muslim terrorists who want to drive them into the sea. This is nothing but propaganda employed to keep us from making critically informed judgments and it is NOT the only option. This is a false dilemma. I believe it’s imperative that we throw off the yoke of bias and bigotry and make sound judgments based on Biblical principles.

Was Jesus not the Prince of Peace?  Did Jesus not say, “Blessed are the peacemakers for they shall be called sons of God“?  So why do we insist on taking sides?  Contrary to what we are constantly told in mainstream evangelicalism, both sides are at fault.  And unless we remove the beam from our own eye, we will never see the problem and therefore will never work toward a solution.
Unless we divest ourselves from what I believe are unfounded biases based on a skewed view of Scripture, we will never fully comprehend the complexity of the Palestinian/Israeli conflict, nor appreciate the potential for a peaceful coexistence. Ultimately, in my view, the ONLY lasting solution is Jesus Christ. But the way things stand right now, how do you think Jesus is perceived by the Arab population? They believe that Jesus is their adversary solely because of their ethnic origin. Jesus, the Christian Zionists believe, loves the Jewish people at the exclusion of a billion Arabs.
This myth must be dispelled because it simply is NOT Biblical. I attempted to address that HERE, so since that is not the full intent of this post, please consider my thoughts from what I believe comprise a sound Biblical perspective.
Let me quickly interject a documentary that is pertinent to this subject. If you have not see “Little Town of Bethlehem” I highly recommend it. The movie’s goal is to foment peace within the embroiled Middle East and specifically Palestine. The movie traces the lives of 3 men, each born in Bethlehem and views the Israeli/Palestinian conflict through these very disparate lenses i.e.one Jew, one Arab and one Christian. These three have one common goal:  A desire for peace through non-violence. And that brings me to the main reason for this post.

Below, you will find a video of Yonatan Shapira, a former Israeli pilot who decided to take the path of peace.Yonatan’s connection to the above documentary?  He’s the Jewish man from Bethlehem. Had I not known Yonatan Shapira  through the movie, it’s likely I would have believed the lies and the propaganda about his Flotilla effort. This man’s father was a highly decorated fighter pilot in the Israeli army and he, along with Yonatan’s brother also joined Yonaton’s peace efforts.

Watch the video and determine for yourself if this man is merely a propagandist being used by the anti-Israeli forces.The path of peace takes a great deal more courage than that of war. As Christians should we not do everything in our power to foment peace, both individual and societal? God forever destroyed the wall of enmity between us and Him by the blood of our Savior. And Jesus asks that we extend that ministry of reconciliation to the world.

This entry was posted in Dispensationalism, Israel, Zionism. Bookmark the permalink.