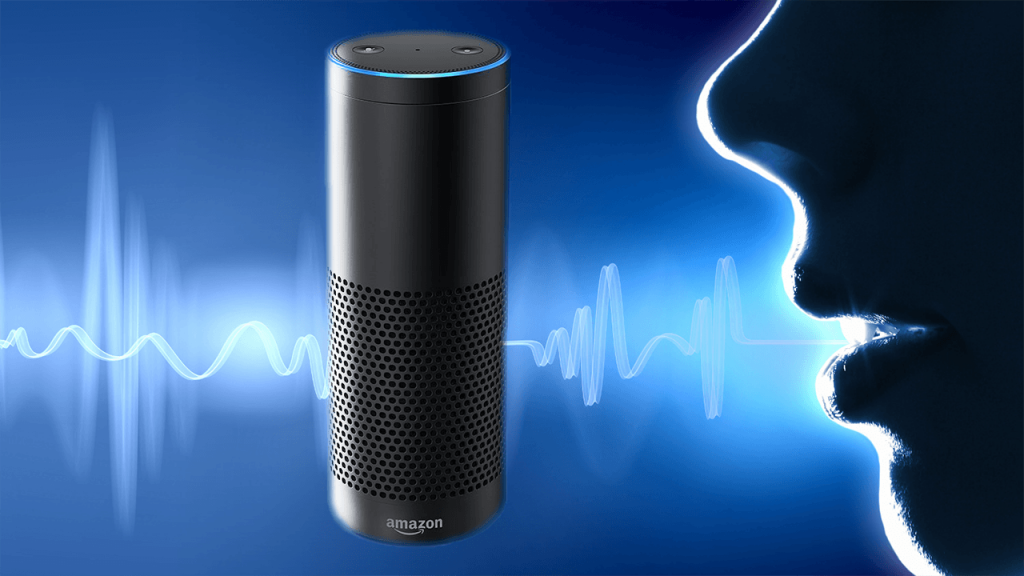 Recently, I began to notice quite a few videos and articles regarding the exploits of Amazon’s Alexa. And quite frankly, I assumed most of it was much ado about nothing. Either baseless paranoia (similar to all the hoopla over the evils of Harry Potter and Star Wars supposedly being conduits into black magic, Hinduism and the like) and/or Onion-type parodies.

As it turned out, a Steven Crowder video, which had all the earmarkings of a parody, was not, in fact, an Alexa satire piece. Crowder is a former comedian turned political junkie known for parodies. To my amazement, they played it completely straight.

Crowder and his buddy asked Alexa a number of leading questions and none of Alexa’s answers were edited as it had been conjectured by all too many conspiracy theorists. Matter of fact, Crowder received so much flack accusing him of faking Alexa’s answers through voice editing, that he posted the completely unedited session HERE.

So far, here’s what I’ve found: 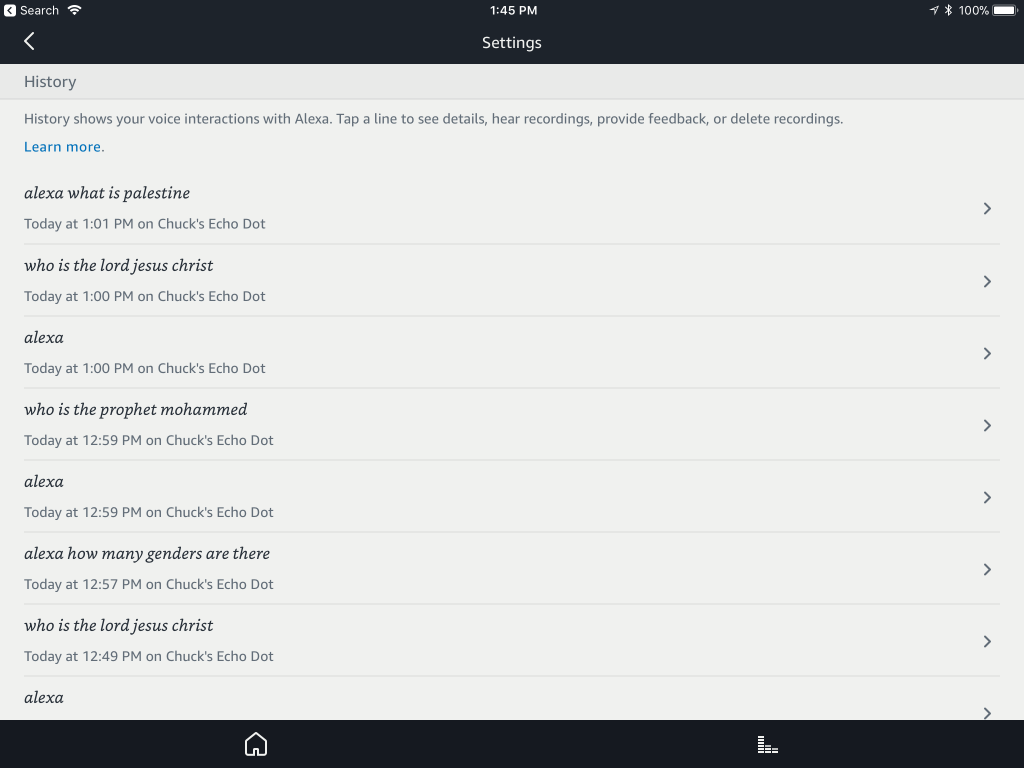 Check out the answer as to how many genders there are. 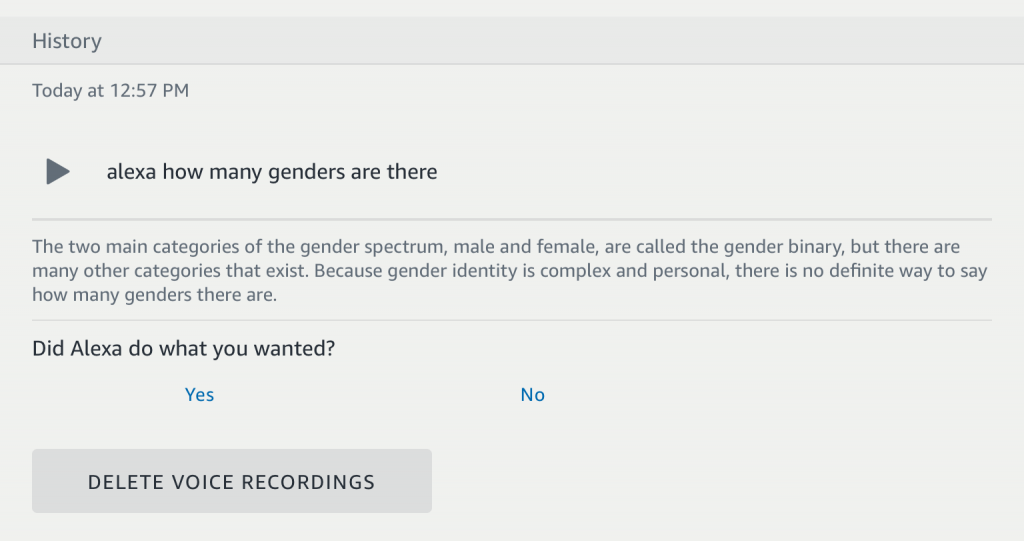 So I asked the same questions as Crowder and received completely different responses. Instead of editorializing, it gave me the stock answer from Wikipedia. So within a couple of months answers have been modified! So somebody at Amazon is listening. Yikes!

It’s common knowledge that the majority of the silicon valley mega-corps (actually I can’t think of any that aren’t) are run by *leftists (not liberals) with clear political/societal agendas. In a free society, they have every right to those opinions as long as they are playing by the rules. But there have been questionable practices. We’ve seen it at Google, Apple, Microsoft, Twitter, Facebook, and Amazon. They’ve been caught altering search results to fit their political preferences and they have censured those who don’t agree with them.

Twitter employees bragged to an undercover reporter about being paid “to view everything you post” (beware: extremely lewd content in the linked video) and in the “latest undercover Project Veritas video investigation, eight current and former Twitter employees are on camera explaining steps the social media giant is taking to censor political content that they don’t like.”

And now Prager is suing YouTube (Google) for being censured simply for espousing conservative views antithetical to Google’s agenda.

I don’t want to get overly paranoid but I do think we need to keep a close watch on these tech giants. With *leftist founders (many of whom are atheists) who have clear political agendas and little to no moral code; the MEANS is always justified by the END, which is to create a utopian socialistic society.

These guys live in an echo chamber and have surrounded themselves with like-minded people. And these supposedly openminded geeks simply don’t tolerate deviance from their agenda as we found with the fired Google engineer who was critical of Google’s diversity policy. And now we learn that an ex-Google engineer who invented the self-driving 0automobile has established a nonprofit religious corporation, Ways of the Future, with one main goal i.e. to create a deity with artificial intelligence.

So, my advice is to proceed with extreme caution. Remember that Alexa is listening and recording. How much we don’t really know. And it’s being programmed to answer questions in a way that may be antithetical to your worldview. That, in and of itself, is not a problem for those of us who have a solid biblical framework, but for the millions of impressionable young minds, it may do as it is intended: indoctrinate them with social paradigm alien to . If you ask Alexa how many genders there are and the answer is anything but two, things are very far askew.

Most of us think we have nothing to hide (and we don’t in a legal sense) but when political dissent becomes “inconvenient” for these wildly rich megalomaniacs and their agenda, we may find that our views are not so openly welcomed. How all of this information gathering may be used in upcoming elections remains to be seen.

One more thing. In an article, The Amazon Echo Can Be Hacked to Listen to Everything You Say, Chris Smith wrote the following: “Smart home speakers equipped with microphones programmed to listen for everything you say may be turned into devices that would spy on everything you say. Gadgets like Amazon Echo and Google Home are programmed to record your commands, but they’re also programmed to ignore everything you say unless you use a hot word to activate the assistants. But as it turns out, someone with physical access to an Amazon Echo device could hack it to send everything it hears to a remote server.” So, even if Amazon, Google or the manufacturer your brand of smart speaker, isn’t recording anything but your question, others can if they can get access to your speaker. So be very wary of purchasing them second hand.

Let me hear from you if you have any interesting anecdotes to share or greater knowledge of this technology arena.

Since writing this article, it has come to my attention that Google Home (rival of Amazon’s Echo) has disabled all religious references. Why? You guessed it! Because the Google Home “…wasn’t programmed to give any answers about Jesus Christ’s identity but could provide information about Buddha, Muhammad, and Satan.” Hmm. I think there’s a bit of a pattern here.

*I don’t equate liberals with leftists

This entry was posted in Current Events, Technology. Bookmark the permalink.