Posted on September 20, 2011 by Chuck Coty
As I contemplated notifying you of the following event, a very strange and rather unsettling thought hit me. Peace and non-violence are most often associated with hippies and leftist wimps and rarely the overriding themes employed by Christians. It’s not only acceptable but it’s downright lauded that we squash the commies and destroy all those who oppose us. No, I don’t want to come across too cynically, but I do believe we need to change the way we engage others who don’t share our views.At any rate, please consider attending the online September 21st “Global Voices of Non-Violence” teleconference, which seeks peace in the Middle East. Some of you have seen the documentary “Little Town of Bethlehem” which will be featured during this teleconference. For those who haven’t, I highly recommend it. It’s the wonderful story of reconciliation between Christians, Arabs and Jews as they join the forces of peace.

Matthew 5:9 (NASB) “Blessed are the peacemakers, for they shall be called sons of God.”
Isaiah 9:6 (NASB) For a child will be born to us, a son will be given to us; And the government will rest on His shoulders; And His name will be called Wonderful Counselor, Mighty God, Eternal Father, Prince of Peace.

2 Corinthians 5:18-19 (NASB) Now all these things are from God, who reconciled us to Himself through Christ and gave us the ministry of reconciliation, 19 namely, that God was in Christ reconciling the world to Himself, not counting their trespasses against them, and He has committed to us the word of reconciliation.
I realize that earthly peace is not the ultimate answer, since man’s problem is spiritual enmity and separation from God. However, in my view, earthly peace should be a byproduct of our eternal peace, which is born of faith in Jesus Christ through reconciliation with God.
At this time, sadly, the majority of Christ’s earthly body (the Church) does not appear to be spreading a message of non-violence.  Why?  Because they believe (as did I not too many years ago) that future violence and massive death tolls will be the result of the inevitable and imminent plan of God, culminating in the final battle of Armageddon.
Therefore, this peaceful effort will forever spin it’s wheels unless and until the widely held eschatological presuppositions of our day are challenged. And I believe this eschatological paradigm must be defeated because I do not find it particularly Scriptural. Matter of fact, I think it is an unwitting assault on the Gospel and the integrity of God’s Word.
Until the tail end of 2005, I lacked the historical context necessary to more fully understand Scripture at this very crucial point.  I don’t mean that to sound arrogant, but I do count it a great blessing to have providentially stumbled upon a view that I believe more majestically affords Scripture it’s most inspired status.
So, it should not go without saying that, if this imminent horrific Battle of Armageddon (where 2/3 of the Jews are to die) has been ordained by God, then the efforts of organizations like Global Voices of Non-Violence will fall upon deaf ears in the wake of God’s sovereign plan. But what happens if this view of Scripture is wrong?
In that light, let me share a brief history to help flesh out the historical context of this great battle, most presume to be in our future.
In AD 66, Cestius Gallus marched into Judea and surrounded Jerusalem in an attempt to restore calm at the outset of the Great Jewish Revolt. (I have hyper-linked these resources for your further study. Also, please consider “audience relevance”… to whom is the “you” with which Jesus is referring?  Us?  No, it’s His disciples 1,980 years ago)
Luke 21:20 (NASB) “But when you see Jerusalem surrounded by armies, then recognize that her desolation is near.”
Gallus succeeded in conquering Beit She’arim “the new city” also called Bezetha, in the Jezreel Valley, seat of the Great Sanhedrin (Jewish supreme religious court) at the time, but was unable to take The Temple Mount. During his withdrawal to the coast, his army was ambushed near Beth Horon, and only succeeded in making good his escape to Antioch by sacrificing the greater part of his army and a large amount of war materiel.
It has well been documented that after this unexplained pullback, Christians who had been watchful of the signs (Matthew 24), fled Jerusalem in mass to the city of Pella.  (notice the location of Pella on the map) They were specifically warned NOT to seek safe haven in the heavily fortified city of Jerusalem (which one would have presumed to be safest place), but instead to flee to the mountains. And that’s exactly what they did! 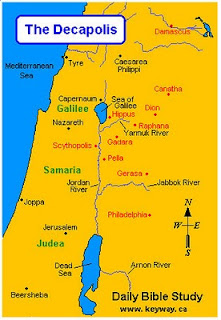 Luke 21:21-22 (NASB) “Then those who are in Judea must flee to the mountains, and those who are in the midst of the city must leave, and those who are in the country must not enter the city; 22 because these are days of vengeance, so that all things which are written will be fulfilled.
Soon after his return, Gallus died (before the spring of 67), and was succeeded in the governorship by Licinius Mucianus. Emperor Nero appointed General Vespasian, to crush the rebellion. In the spring of AD 67, General Titus, the son of soon to be Emperor Vespasian (after Nero committed suicide), amassed a multi-national armed force of 60,000 (the 15th legion) on the plain of Megido. The siege against Jerusalem, prophesied by Jesus less than a generation earlier, culminated in the utter destruction of the Temple in the fall of AD 70 (exactly 3.5 years as had been predicted in the Revelation), as not one stone was left upon another.
Matthew 24:2 (NASB) And He said to them, “Do you not see all these things? Truly I say to you, not one stone here will be left upon another, which will not be torn down.”
So, contrary to popular belief, and consistent with the beliefs of many prior to the mid 1800s, I believe this great battle is not in our future. Hopefully you can see why this matters so much. If this event is in our past (the first verse of the Revelation reads, “things which MUST soon take place”), then that will change our entire outlook on the victorious nature of the Gospel. We must, in my view, become ministers of reconciliation both spiritually and physically.
Join us for the Global Voices of Nonviolence LIVE launch event on Beliefnet.com.

When: Wednesday, September 21, 7:00 p.m. EDT
Where:  Washington D.C., streamed LIVE on Beliefnet.com from the campus of The Catholic University of America
What: The online premiere of the award-winning film Little Town of Bethlehem followed by a live panel discussion

Learn more about Global Voices of Nonviolence
If you can’t attend the event, the film and a recording of the panel discussion will be available on Beliefnet.com through Oct. 2.
Little Town of Bethlehem has been screened in nine countries at hundreds of colleges, universities, places of worship, and other venues. Help us keep the dialogue alive. Thank you!

“Little Town of Bethlehem draws us to the “other,” the “neighbor” whom we have been called to love. Real people, claiming the moral high ground, give this movie its credibility and lasting relevance.”