You’ve Got to be Kidding…Right?

Posted on November 23, 2010 by Chuck Coty
You’ve Gotta Be Kidding . . . Right? chronicles Brian L. Martin’s (Editor of Fulfilled! Magazine) eschatological journey. His view of the “last things” (eschatology), though it may be new to you, is soundly rooted in Scripture. Join Brian as he encounters scriptural principles (hermeneutics) like “audience relevance”, “apocalyptic language”, “cloud-comings”, and much more. Prepare to be challenged!
Everyone has a paradigm (worldview) even if it’s not well-defined. When we encounter that which differs from what we have been told, we often immediately jettison the new view without serious consideration. Before even carefully analyzing the facts, we ask skeptically, “Who else believes this?” Have you ever wondered why we’re unwilling to take up the task of being faithful Bereans? I think it’s a matter of confidence. We lack the boldness to push commonly help presuppositions aside, especially when those more learned and spiritually astute, oppose that which is sitting before us.
And this is tragic, especially for a generation that has access to more Scriptural tools than any generation in history. Certainly, we are at a disadvantage with those who have a working knowledge of Greek or those who have a boatload of seminary training in their background. There is no substitute for hard work and diligence but we must realize that even pastors and seminary professors interpret the Bible through a lens that may be filled with errant presuppositions. This is the reason the Bereans were lauded. They took their responsibility to “see if these things are so” very seriously. Should we do any less?

Acts 17:11 (ESV) Now these Jews were more noble than those in Thessalonica; they received the word with all eagerness, examining the Scriptures daily to see if these things were so.

J.I. Packer made a rather intuitive statement that sheds a great deal of light on the plight of the today’s Christian. And I suppose this is really not a problem confined to our modern world. Consider this:

We do not start our Christian lives by working out our faith for ourselves; it is mediated to us by Christian tradition, in the form of sermons, books and established patterns of church life and fellowship. We read our Bibles in the light of what we have learned from these sources; we approach Scripture with minds already formed by the mass of accepted opinions and viewpoints with which we have come into contact, in both the Church and the world. . . . It is easy to be unaware that it has happened; it is hard even to begin to realize how profoundly tradition in this sense has molded us. But we are forbidden to become enslaved to human tradition, either secular or Christian, whether it be “catholic” tradition, or “critical” tradition, or “ecumenical” tradition. We may never assume the complete rightness of our own established ways of thought and practice and excuse ourselves the duty of testing and reforming them by Scriptures. (Fundamentalism and the Word of God, by J.I. Packer. [Grand Rapids, MI: William B. Eerdmans Publishing Co., 1958.] pp. 69-70)

It’s not a matter of if we read the Scriptures with built-in biases that we’re not aware of. It’s a given that we do. It’s only natural. However, what’s of vital importance is recognizing that our current presuppositions (which may be errant) can prevent us from understanding the truth. In order to maintain sanity, we often ward off all views that oppose our own and allow only that which corroborates and sanctions our paradigm to enter our minds. Our defense mechanisms, valuable in many ways, do at times insulate us from the truth. 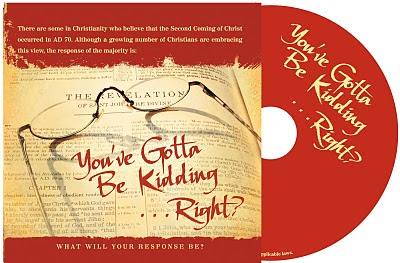 With these things in mind, consider for a moment a view of eschatology that may be foreign to you. And do your best to be objective. Brian Martin, the producer of “You’ve Got to Be Kidding….right?” and author of “Behind the Veil of Moses, presents a solidly Biblical view of eschatology. Know this. Brian is deeply committed to the authority and inspiration of Scripture. So his view emanates from a very high view of the Bible. So much so, that he challenges those who so flippantly cast off the many eschatological passages tied to such blatantly imminent language i.e. “soon”, “at hand”, “shortly” and “in a very little while”.
My recommendation is that you watch the video in two sessions. Then revisit the video jotting down all verses used so you can better understand the context. Well, enjoy and be prepared to smile. Brian has a wonderfully refreshing sense of humor. =)
This entry was posted in 2nd Coming, Eschatology. Bookmark the permalink.