30 Days of Abstinence or Indulgence?

When I came out to the kitchen this a.m. Debbie had set a copy of the Tampa Tribune’s front page Metro on the counter with the following article highlighted. 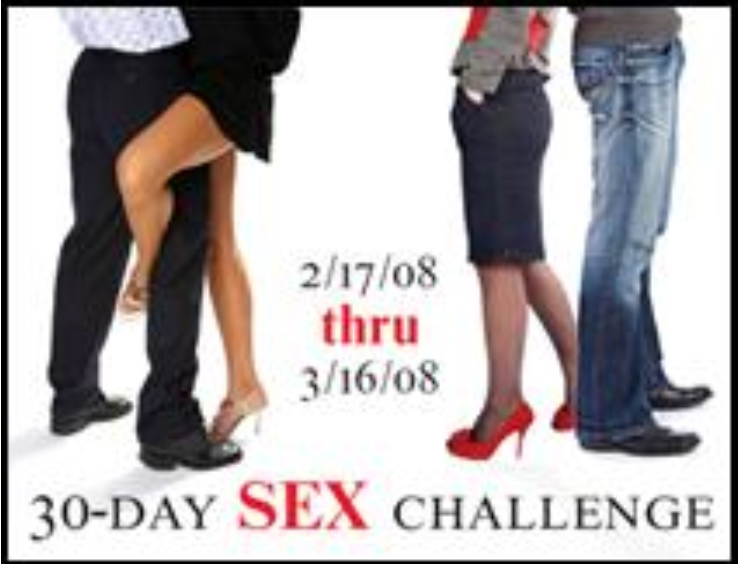 The article begins, “Relevant Church offered an interesting challenge to its members Sunday: 30 straight days of sex or no sex at all.” Apparently the “30-Day Challenge” exhorts the married participants to have sex for 30 days straight while the single folks are to abstain for 30 days.

Upon first blush (pun intended) do you see anything inherently wrong with this picture? Have we raised the bar so low where we hope the unmarried abstain from sex for a whole 30 days in a row? What happened to the commitment to lifelong purity outside the marriage bed? Is that passé and out of touch? Is that way too much to ask in this world dominated by promiscuity? Do we have to stay so relevant that we resort to lowering our expectations to such pitiful levels?

“The intent of the challenge”, the articles continues, “is to return sex to the realm of marriage”. A worthy goal to be sure. Certainly nothing wrong with that. But is that the message this attention-getting theme sends to a world starved for truth and Biblical clarity? One of the church pastors stated, “he hoped the sex challenge would excite young Christians”. I bet it will!

I am not naïve. We all have to deal with temptations and the enticements today that are exponentially greater than they were when I was a kid. I understand all that. By my questioning I’m not insinuating that this serious problem hasn’t infiltrated the church. We know that it has and we’ve been told that there’s little difference between the church-goer’s behavior and that exemplified by the world. I get that. But isn’t that part of the issue. Why is it this way and is this sort of 30-day challenge sending the right message?

Here’s my problem. When we set the standard so pathetically low are we not ignoring the power and presence of the Holy Spirit to sanctify us? Are we so bankrupt that asking folks to abstain from sex outside of marriage becomes just a silly whimsical idea relegated to the 1950’s? Listen, I’m not attempting to be judgmental. Relevant Church obviously has a strategy to reach those through non-traditional means. I don’t decry their attempt at a “relevant message” but I do question their standards against Scripture.

Debbie and I had a youth lifegroup ministry in our home for four years and the majority of the attendees were extremely worldly. A number came from broken families and they’d spent more time in juvenile detention than in church at attention. We had a varying amount of success with these kids but one thing we never did was lower the standards. These kids were starved for boundaries because they knew that the lifestyles they were leading were going nowhere fast. We never softened the expectations. We never told these kids what they wanted to hear just to maintain their attendance. We didn’t tell them to stop taking the Lord’s name in vain for a mere 30 days or to refrain from sex for what they might consider a manageable period of time. It was wrong on day one, day thirty one and year 21. 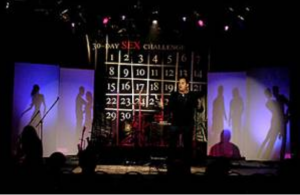 I just don’t see a pragmatic antiseptic method to deal with the reality of sin. Paul told Timothy to “flee youthful passions”. These mid teens knew their morally-challenged behavior was wrong because of Biblical prohibitions we shared with them including the commensurate consequences.

On Metro page six the article continues with the comments of an engaged couple that is quoted as saying, “We’re going to take the challenge. We talked about it, and we both realize the importance of doing things the right way.” Great! Nothing wrong with that you say? No, but as Paul Harvey says, “And now for the rest of the story”. The engaged man went on to say, “I think it’s worth trying to find out other things about each other.” Yikes! Nothing like being in a relationship for the right reasons. The Tribune writer apparently had an extended conversation with the couple because the following tidbit was added, “Jeff (I changed the name) is expecting a tough month, though”. Is this not alarming?

The abstinence idea seems like it arises from the same logic used to lose a few unwanted pounds or to quit smoking. I would assume that the goal is for this unmarried couple to abstain for longer and longer periods of time until they finally quit this insidious sexually immoral habit—but by the time they are capable of exercising restraint they might find that they have conceived a “mistake” that will alter their lives forever.

Aren’t there serious warnings for those engaged in willful sin? Does God not discipline those that He loves? Should we equate premarital sexual abstinence with pushing away a double chocolate fudge brownie at the end of a meal? Have we lost our way to the point where the message of the cross has been neutered by such low expectations? Are we not told, “greater is he that is in you, than he that is in the world.” And are we not ignoring a whole host of unforeseen consequences that will come as a result of sexual promiscuity? Are we disregarding God’s preordained standards of excellence?

What does the relevant Scripture say about sexual immorality? Does it merely hope for a mere month-long restraint from sexual impurity?

Where’s the message of pursuing righteousness? The Apostle Paul told the Ephesians that he didn’t even wanted impurity to “be named among you”. Granted, this Tribune article may have skewed the church’s actual intent. Hopefully the pastor did share the above passages. Did he make certain the Trib writer knew that Relevant Church stood on the bedrock of the Apostle Paul’s teachings? We all know that the media is not beyond exaggerating and sensationalizing and possibly ignoring relevant facts. And let me add that I do not want to judge the motives of the leadership involved in this 30-day program. My guess is that in their own minds their intentions were valid. I don’t doubt their desire to be relevant to those who may not grace the doors of the more traditional-styled churches. But does this message compromise the Scripture in order to be inoffensive? Does the message of a consistent call to repentance morph simply because morality has declined? Is the clarity of the Gospel’s power slighted?

Did the Apostle Paul use his inspired writings to say, “Flee youthful passions for 30 days?” Is this the message that churches should garner front page attention over. How about, “Let marriage be held in honor among all, and let the marriage bed be undefiled, for God will judge the sexually immoral and adulterous”. Or why not say, For this is the will of God, your sanctification: that you abstain from sexual immorality. Surely we cannot expect those who don’t know Christ to adhere to a level of godliness only facilitated by the indwelling Holy Spirit. But why can’t we tell the truth to the young believers and speak about the consequences of willful disobedience?

The Pastor seemed to be taken aback by the exposure. He said, “It’s amazing the kind of media attention we’re getting just for talking about sex.” Oh really? Are you kidding me? How could anyone be amazed by this? The questions should viewed as red warning flags not banners of excitement. I thought the teaching of abstinence while single was rather clear in Scripture. Is this truly all we can expect—that young people avoid immorality for 30 days? Say it isn’t so.

Man it would be my hope that the Tampa Tribune distorted this whole 30-day program and the pastors at Relevant are livid because of it. If the Trib got it right then I’m deeply saddened.

Is this what being “relevant” has come to? If so, maybe we ought to start a new church and call it, “The Irrelevant Church”!

This entry was posted in Abstinence, Relevant. Bookmark the permalink.