Posted on June 3, 2011 by Chuck Coty
Consider the following mind trick from David Copperfield. Can he read your thoughts? 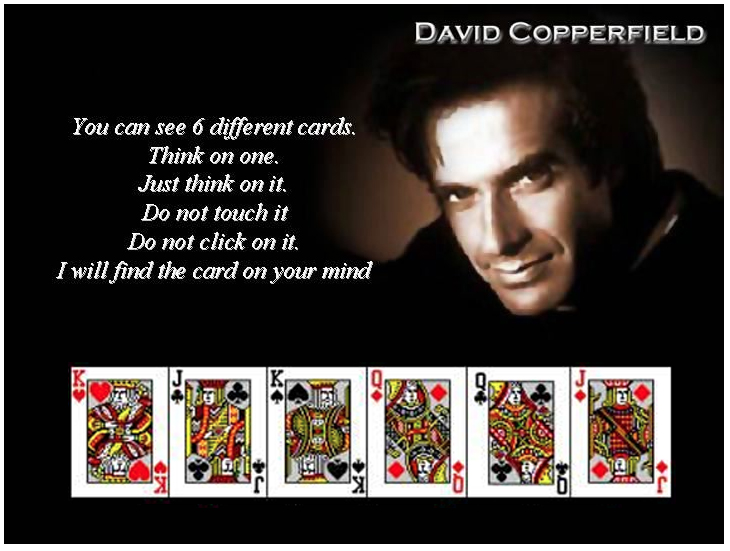 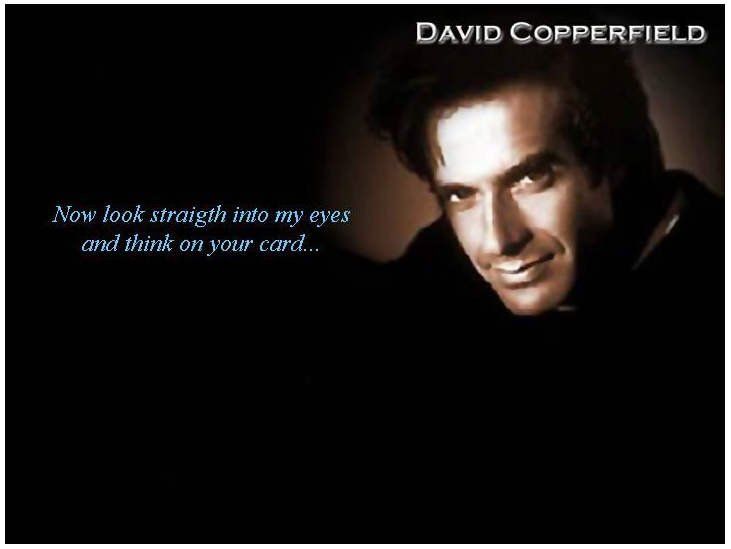 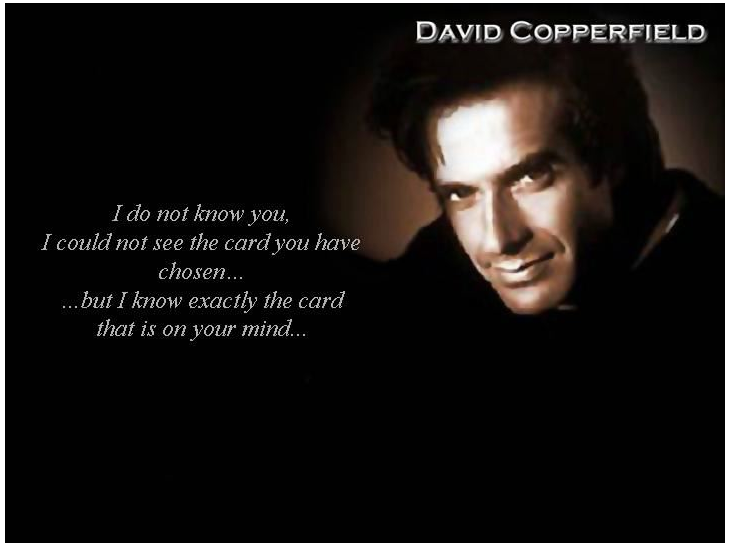 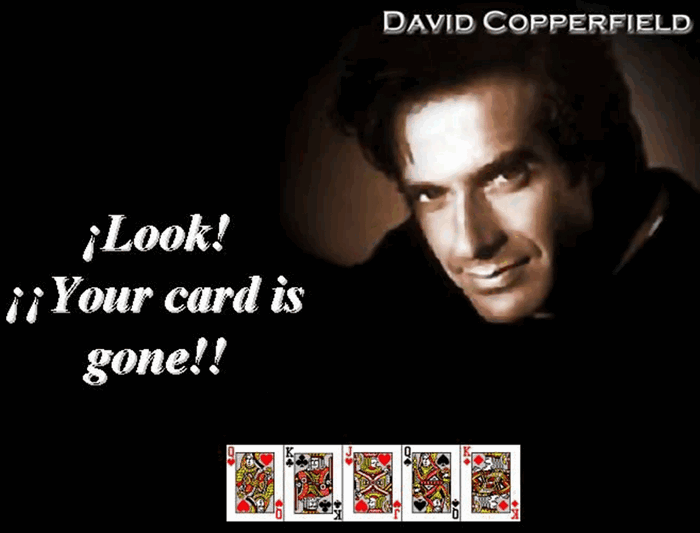 I think this is a great lesson as we attempt to interpret the Bible. Though we may be unaware, we often don’t approach Scripture with an open mind. And that’s not so much an indictment as it is the reality. Our minds are filled with presuppositions some of which may be untrue. Regarding such, in 1958, J.I. Packer wrote the following in “Fundamentalism and the Word of God“:
We do not start our Christian lives by working out our faith for ourselves; it is mediated to us by Christian tradition, in the form of sermons, books and established patterns of church life and fellowship. We read our Bibles in the light of what we have learned from these sources; we approach Scripture with minds already formed by the mass of accepted opinions and viewpoints with which we have come into contact, in both the Church and the world. . . . It is easy to be unaware that it has happened; it is hard even to begin to realize how profoundly tradition in this sense has molded us. But we are forbidden to become enslaved to human tradition, either secular or Christian, whether it be “catholic” tradition, or “critical” tradition, or “ecumenical” tradition. We may never assume the complete rightness of our own established ways of thought and practice and excuse ourselves the duty of testing and reforming them by Scriptures. (Fundamentalism and the Word of God, by J.I. Packer. [Grand Rapids, MI: William B. Eerdmans Publishing Co., 1958.] pp. 69-70)
Isn’t that profound?  I try to remember to read this quote at least once a month since  I consistently find myself in unwitting violation.  It’s nearly impossible to approach the Scripture without bias, so the best we can do is recognize it when it exists and pray that the Holy Spirit will allow us to overcome it.
Following is a case in point. A friend forwarded my recent blog post, “Pray for Israel…” to his pastor, and among being called a cult leader and other reprehensible ad homs,  this pastor wrote:

“As for the Jews, you align yourself with Hiltler, Stalin, and the entire Muslim world today, and I guess you feel very ecuminical in that; but I can tell by yuor slant who you read after now.  It surely is not the Bible.    Since Revelation tells us that all of it will be done shortly (Rev 1.1), and ends by saying all of these things will happen shortly; all of Revelation has been fulfilled to you.  Do you really believe that?“

For my purposes here I won’t focus on the inflammatory stuff. It speaks for itself. However, I would like to call attention to his comments regarding the Revelation. Is it possible that he’s succumbing to the rudiments that make Copperfield’s trick seem truly amazing? The pastor referred to the following verses:

Revelation 1:1 (NKJV) The Revelation of Jesus Christ, which God gave Him to show His servants–things which must shortly take place. And He sent and signified it by His angel to His servant John,

Revelation 1:3 (NKJV) Blessed is he who reads and those who hear the words of this prophecy, and keep those things which are written in it; for the time is near.

Now, let me ask a question? If you picked up the Bible for the first time and read these verses from the Revelation with no preconceived ideas (as Packer suggests), when would you believe the time of the Revelation was to be fulfilled? Do “MUST SHORTLY take place…for the time is NEAR“, seem like references to a 2,000 year period?  By the pastor asking rather mockingly, “Do you really believe that“, it’s apparent that he doesn’t believe that Jesus spoke truthfully through the angel. And I find that quite alarming and sad.
Does this not strike at the heart of Biblical inspiration and at the deity of Christ? Remember, in the Revelation Jesus was no longer speaking as a man as He was when He prophesied that His coming would be within a generation (Matthew 24:34).  This time, approx 35 years after his “this generation” proclamation, He’s speaking from a position of exaltation at the right hand of the Father. At that point, Jesus clearly knew not only that the “time was near” but He had to have known the exact day and hour of His return.
How far off course have we traveled where the ones reading the literal timing of things to come are the ones who are considered the cult leaders and heretics? When this fellow says, “It’s surely not in the Bible,” I have to wonder what Bible he’s reading. Daniel was exhorted to “seal up the vision” because the things with which he was prophesying were “many days yet to come” (almost 600 years before the time of Christ). Yet, the recipient of the Revelation was told, “Do not seal the words of the prophecy” because “THE TIME IS AT HAND.”
I don’t know how the contrast between Daniel and the Revelation could be any greater of an indictment upon the modern day prophecy experts who insist that the Revelation’s prognostications are still future? How can we continue to say that we believe in Biblical inspiration and yet totally disregard the above time statements?


I realize treating these passages literally is not in vogue, but isn’t it time to discard our presuppositions and let the Bible speak for itself?  What’s wrong with considering these matters with an open mind, not being ruled by assumptions that may be Biblically unwarranted?
In and of itself, properly interpreting Scripture is a very difficult task. So it seems imperative that we realize how easily we can be fooled. If you were initially amazed by the Copperfield “trick”, it should stand as a lesson regarding presuppositions. You assumed, as I did, that all of the cards in the second set (minus the one we fixed our eyes upon) were different. We were tricked by an incorrect assumption.
And we have assumed, based upon years of sermons, books, and conversations, that the Revelation MUST be entirely in our future. However, if it was written in the first-century, that is simply not a possibility, unless Jesus was intentionally misleading John. And if that was the case, we have far more grievous issues to deal with than eschatology.
Do we have the faith to first believe Jesus and then concern ourselves with the “how can this be true”, later?
This entry was posted in Hermeneutics. Bookmark the permalink.