Should Matthew 24 be Divided at Verse 36?

Many scholars argue that Matthew 24 (the Olivet discourse) should be divided at verse 36. They say that when Jesus used the phrase “But of THAT DAY” this is a clear demarcation of a changing subject matter. So they contend that through verse 35 Jesus was speaking of the “end of the age” and the destruction of Jerusalem, and then in 36 Jesus was speaking of His parousia at the end of time. At first glance this argument may sound tenable.

However, after employing “the analogy of faith” (allowing Scripture to interpret Scripture), one wonders why so many commentators and scholars came to the above conclusion. The Olivet is found in Matthew 24, Luke 17, 21 and Mark 13. Look at the chart below. 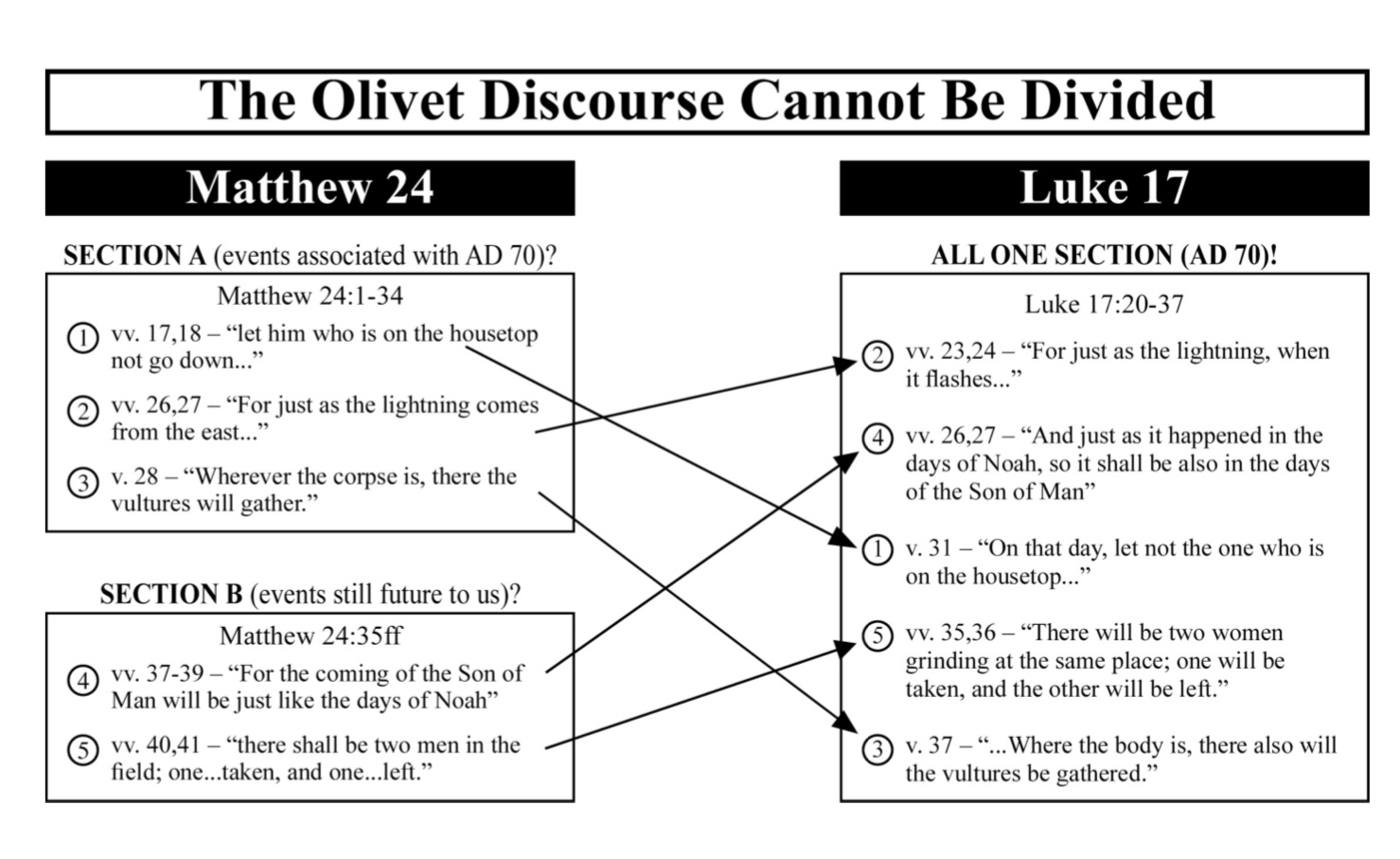 Let’s break it down to make this clearer to test this “divided” hypothesis:

Now let’s look at Luke’s account from in chapter 17 (on the right above) Luke 17 discusses the same events as Matthew 24, however there is not even a hint that two different time periods are under consideration.

Luke lumps all these events together as if they would all happen in the same “day that the Son of Man is revealed” (vs. 30). Friend, Ed Stevens, wrote, “Luke gives no indication that he is talking about two different groups of events that would occur at two separate comings of the Son of Man separated by thousands of years.”

This presents what appears to be an insurmountable problem for those who believe that Matthew 24 should be divided.  If Matthew was referencing two sections (or two different time periods), then Luke’s account is incorrect, because he mixes the five events up as if they are all to happen in one time period. So, either Luke is mistaken (and therefore uninspired), or it is errant to divide Matthew 24 into two sections.

Stevens again, “Of course, the solution to this is that both Matthew and Luke speak of the same events which would all happen in the same time period. And, Matthew 24:34 tells us when that time period was to occur: the “generation” alive when He spoke those words (the generation from AD 30-70)! This is all the more apparent when we compare Matt. 24:34 (“this generation”) with Jesus’ comments a few hours before in Matt. 23:36 (“this generation”), as well as his statements to the disciples that “some of those standing here shall not taste death until they see the Son of Man coming in His Kingdom” (Matt. 16:28).”

For further argumentation I recommend reading chapter 9 of John L. Bray’s “Matthew 24 Fulfilled”. I’ll link it HERE. If you would like to purchase the book, go to American Vision.