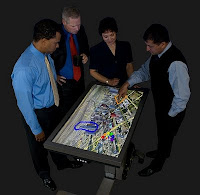 The TouchTable looks like a giant iPhone that marries satellite imagery with a plethora of data sources. TouchTable, Inc., the creators of this amazing device, have developed applications for intelligence gathering and law enforcement, but the sky’s the limit for the consumer as well. So if you have $60k sitting around the house, looks like this one’s got your name on it. 🙂  These are amazing times!

This entry was posted in Technology. Bookmark the permalink.