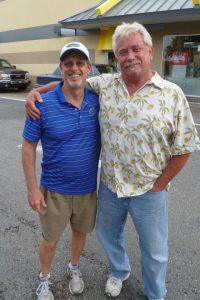 This is dedicated to Mike Fitzpatrick, long time friend and running buddy from Boca High days. Mike was the epitome of the party guy and one heck of a talented harrier. He’s been in the auto dealership business out in SoCal for much of his adult life. We crossed paths via phone a few years ago and have remained in contact since.

Back in 1971 when the above footage was taken, I thought I was earning my way Heavenward by staying out of trouble. Mike on the other hand was doing just the opposite with reckless abandon…”eat, drink and be merry for tomorrow we will all die”… and each day he didn’t was due to God’s merciful grace! During his morning runs Mike could regularly be seen heaving roadside, ridding himself of the prior nights encounter with multiples of six packs. I on the other hand, never touched a drop of alcohol, smoked the evil weed or did a whole lot of carousing. One living it up while the other living it down…both of us, however, were at the time running the same course…our ultimate destination…an eternity apart from God.

At the tail end of my senior year, after finally realizing that I couldn’t earn my way into Heaven, God began to crystallize my thoughts. What had eluded me for so long became abundantly clear…I didn’t have to “do” or “not do” anything to secure my spot with God in the afterlife. It was never about my behavior. I simply needed to put my faith and trust in Christ and allow His payment for my sin to do what I could not. (Ephesians 2:8-9) [The testimony of my family’s conversion to Christianity can be found HERE or below, as Dr. David “Rev” Nicholas shared at my Mom’s going home party, October 31, 2009—if you are thusly inclined, in “BECOMING“, I share what Rev calls the “the bad news and the good news”] 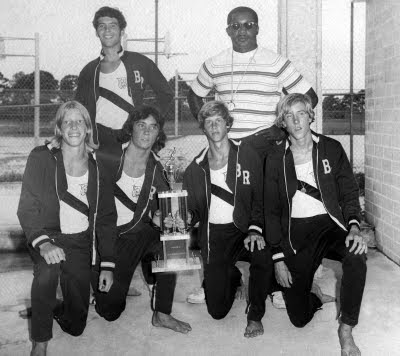 I don’t know all the details, but at some point in Mike’s life, he also became acquainted with the death, burial and bodily resurrection of Jesus Christ. At the very moment he recognized his need for the Savior, and even though we had no clue of each other’s faith commitment to Christ, we became eternal brothers on God’s vaunted track team. Aint that awesome! It sends chills down my spine thinking we’ll once again run as teammates!

For at one time we were on totally different roads with the same ill-fated ultimate destination, that is until Christ revealed Himself to us. Now, Mike and I talk regularly about life as a Christ-follower and of course running, because it will always be our passion. There’s something about running that is unique…with each breath is the presence of God.

Bless you Mike Fitzpatrick, for you will forever be my brother. I love ya man! My prayer for you Mike, is that God will continue to mold and shape you into a vessel of His mercy and grace. God has great plans for you brother. From the sands of Spanish River Park to the grasslands of St Andrews, to the asphalt at Boca High, we now run a very different race with one truly amazing outcome. The road is clearly long, winding and rarely smooth, but the race is worth every dime Christ’s invested in us! Bless you!

“Do you not know that those who run in a race all run, but one receives the prize? Run in such a way that you may obtain it. 25 And everyone who competes for the prize is temperate in all things. Now they do it to obtain a perishable crown, but we for an imperishable crown.” 1 Cor 9:24-25

“Therefore we also, since we are surrounded by so great a cloud of witnesses, let us lay aside every weight, and the sin which so easily ensnares us, and let us run with endurance the race that is set before us, 2 looking unto Jesus, the author and finisher of our faith, who for the joy that was set before Him endured the cross, despising the shame, and has sat down at the right hand of the throne of God.” Heb 12:1-2

For Les Stone...my prayers will continue.

David Nicholas Memorializes Mom
This entry was posted in Updates. Bookmark the permalink.