Is Barack Hussein Obama the AntiChrist?

There are all kinds of wild accusations running rampant on the internet but the reality is that being both The Antichrist of the World and President of these United States may prove to be an unwarranted strain on Barack’s energies–notwithstanding the need for just compensation. Not that I have done it before, but ruling the world sounds a whole lot more taxing than playing charades with Cheney. 🙂 Later, I will attempt to take a serious look at the crazy internet claims, but first, let’s first consider our pressing political conundrum. What are we going to do on Tuesday, November 4, 2008?

Please take the time to read the recent Alan Keyes World Net Daily (WND) article, “2-Party System – No Choice but Evil”. Keyes exhorts us not to be ruled by fear but be of sound mind and moral conviction as the election approaches. Easier said than done! Alan makes some rather challenging but apropos comments regarding the current presidential climate and our responsibility therein.

Who should we vote for? Barack Obama, John McCain, Alan Keyes, Ron Paul, Pat Paulson, Pete Townsend or ________? Should conscience play a significant role, and if so, from a practical standpoint what does that mean? It seems as though we are perpetually left with less than enthusiastically-driven choices. Are we to succumb 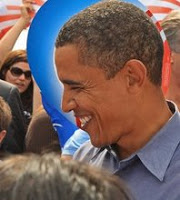 to the bullying of conservatives like Gary Bauer, who argues the “lesser of the two evils” approach is both prudent and pragmatic? In lieu of the Obama extremes (he may out-left Brian Moore the Socialist Party candidate), it is rather tempting to cave into the horrific ramifications of Obamarama and punch the golden McCain ticket. (A little veiled Willa Wonka reference!)

Even Dr. James Dobson seems to be hedging just a mite from his rather emphatic statement uttered this past January, “Speaking as a private individual, I would not vote for John McCain under any circumstances”. I don’t for a minute question Dr. Dobson’s integrity or his motivations (since he has long proved to be a principled leader), but I do wonder about our collective resolve to stand against evil–since it is clearly not a respecter of political parties. My guess is that Dobson will reluctantly cast his support in favor of McCain.

Should we do the same? Alan Keyes, whom I respect a great deal, says that we shouldn’t. Alan writes:

No one can or should deny another the right to change his or her mind in light of new information or a better understanding of the facts. Dr. Dobson may be correct when he cites a “constantly changing political context.” However, he presented his opposition to McCain as a matter of conscience, not political calculation. As Dr. Dobson wrote in an essay defending his position of conscience, “Polls don’t measure right and wrong; voting according to the possibility of winning or losing can lead directly to the compromise of one’s principles. In the present political climate, it could result in the abandonment of cherished beliefs that conservative Christians have promoted and defended for decades. Winning the presidential election is vitally important, but not at the expense of what we hold most dear.” (“The Values Test,” the New York Times, Oct. 4, 2007) From this perspective, the question is not whether the political facts have changed, but whether there has been a change in the moral truth that should govern conscientious choice. In this respect, the moral facts about both Obama and McCain were clear when Dr. Dobson first declared his position of conscience. Nothing has changed.

We need to prayerfully consider our role in the upcoming election. Many issues are on the table. Do we “change” simply for change sake? Do we know where that change will lead?

As you think through these things please also mull over your reaction and ensuing responsibility to the presumption that Barack Obama is THE Antichrist. Preposterous you say? Not so fast. I’m certain that I’m not alone in the receipt of such emails detailing the composition of this beastly character (the antichrist). Should we continue to propagate this kind of thing? Should we consider it a viable possibility? Since the election’s stretch run is going to be so emotionally charged, I think it is necessary for us to seriously consider what we do and don’t pass along to our e-buddies.

Is it not our responsibility to confront this whole notion head-on with Scripture? Gary DeMar of American Vision has done just that in a recent blog article, “Hal Lindsey, Obama, and the Antichrist“. One thing we simply can’t afford to do is foster an even greater distrust of the Word of God based upon wild and crazy conjectures. There are lasting consequences when God’s Word is perverted. I don’t think it’s intentional but the damage has nonetheless been done when these emails proliferate unchallenged. It isn’t simply harmless fun when we don’t put an end to that which can be proved false.

Undoubtedly you’ve received more than one “serious” email suggesting (some “proving”) that Barack Obama is the antichrist. This following short blurb subtitles the blog, “Barack Obama the Antichrist?”: (Barack Obama may be the Antichrist, he has risen up out of nowhere, he mesmerizes crowds, people are gathering in huge numbers, he is likely becoming the next President of the United States. Do not look only to what I say, but look to your Bibles, to passages in John, Daniel, and Revelations.) Matter of fact, a pole on this blog, posits some rather chilling results with over 73% of the 8,756 respondents believing that he is or might be the antichrist. (BTW, the book of Revelation doesn’t end with an “s”)

Excuse my English, but this sort of nonsense (I know that’s harsh but we have to call it like it is) totally ignores the Scriptural references regarding Antichrist. Although truth based upon sound interpretation has never short-circuited people from making similarly outrageous claims (further damaging the credibility of the inerrant Word), for the sake of the Gospel I don’t believe we should allow these kinds of claims to continue into perpetuity. At least not without serious and unintended side-effects. We must handle the Word of God precisely and without preconceived prejudice.

Let’s dispel this irresponsible “Obama’s the antichrist claim” not because the man doesn’t fit the Biblical definition, but by applying consistent Biblical hermeneutics (the science of study). We know that Obama cannot be the antichrist. How? By resorting to God’s Word. But before we determine the “how” let’s create a Scriptural definition. Antichrist is only found in 4 verses, all from John’s epistles—and none from the Revelation. The Greek word Antichristos is anyone who is Christ’s adversary. Anyone who is anti-Christ. Let’s consider the Scriptural usages thereby creating a definition based on the Word not from some fictional book series.

Now let’s put this in context and prove beyond a shadow of a doubt that although Barack Obama may be the worst and most dangerous presidential candidate to be a hanging chad away from the highest office in the land, he is not “THE ANTICHRIST”. How can we be so certain? Audience relevance. Scriptural context.

We must recognize that although the Scriptures were written FOR us (2Tim 3:16) they were not written directly TO us. If we are to proclaim the miraculous nature of God’s Word we cannot continue ripping passages from their context in an effort to meet our expectations. Considering the only 4 passages containing the word “antichrist” we learn the following:

In conclusion, I hope we will dispel irresponsible statements regarding Obama or anyone else as being THE antichrist. I’m sorry if I may be perceived as offensive here, but the Word of God must not be prostituted to satisfy errant eschatologies. John tells us that the “Spirit of the anAntichristwas prevalent in the first century. That does not preclude people today from being anti-Christs, since anyone opposing the Gospel of Christ is anti-Christ, but no one this side of the first century destruction of Jerusalem is a Biblical fulfillment of John’s statements.

I also hope that we can gain God’s mind on how we can best fulfill our stewardship of being ambassadors to the Kingdom of Christ. Should opposition to Obama drive us to McCain? If the Christian community ever became united in purpose and commitment to Christ there’s no telling where our world would be.

This entry was posted in 2nd Coming, Antichrist, Apocalypse, Eschatology. Bookmark the permalink.