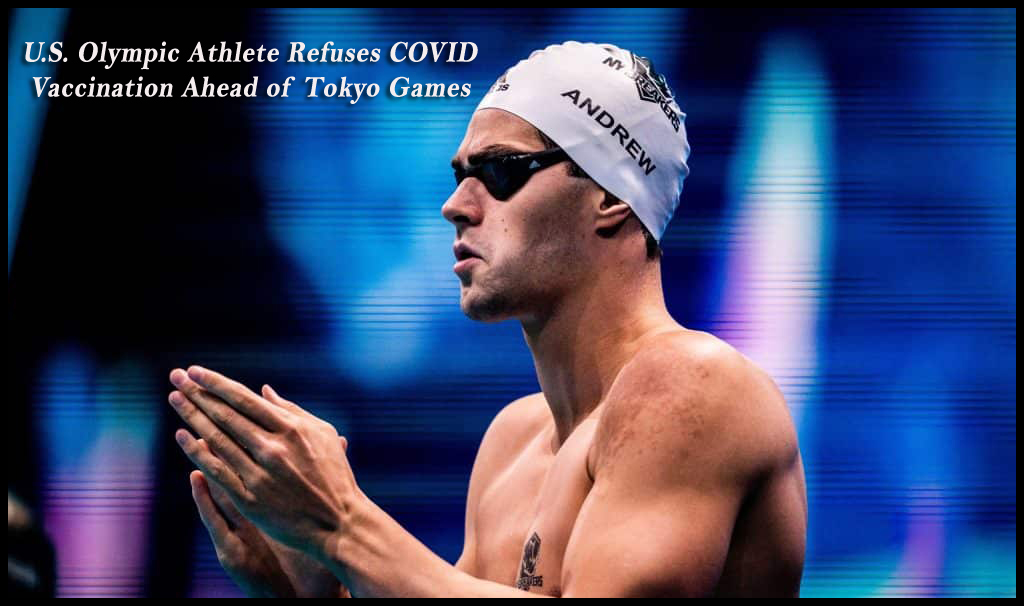 If you haven’t heard, a 24 year old NFL player collapsed on the field last night. He made a tackle, got up and then within seconds fell to the ground. It was such an ugly situation that many of the players immediately huddled into groups, some praying. That was a heartening sight even even if only for a moment. It’s amazing how quickly unbelievers resort to prayer. It’s beautiful thing when the sanctity of life is paramount.

According to sources, the young man, Damar Hamlin, suffered a cardiac event and is in critical condition. Dr. Mike Hansen, whom I follow on YouTube, referred to a condition caused by a blow to the chest that interrupts the rhythm of the heart, “When it gets to the point where it’s so severe where someone actually has a cardiac arrest, the first thing that comes to my mind is commodio cordis”. And this very well could have been the root cause.

In ESPN’s article today and on the NFL’s broadcast last night, not one word was uttered about the possibility of this having to do with an issue other than or in addition to the violent tackle. Donte Stalworth, a former player turned broadcaster, immediately concluded that it was the hard hit. Perhaps he was right. It clearly happened right after the tackle but I’ve seen far great contact without this kind of result. But, the question is, why didn’t anyone say what any thinking person should be pondering i.e. that this heart attack was caused by something other than the collision?

Cardiologist, Dr. Peter McCullough, believes that it was not comodio cordis because after the hit Hamlin stood back up and then collapsed. This happens to a couple dozen baseball players annually but they drop to the ground immediately and simply cannot stand up. This has NEVER happened in football. Dr. McCullough believes that this cardiac event was vaccine related. But of course this simply cannot be the cause since the ad revenue from Pfizer is off the charts.

The medical profession has been quick to dismiss Dr. McCullough’s claims as unhinged. On the Tucker Carlson show, Dr. McCullough made the claim that over 1,500 European athletes have had cardiac events with 2/3 dying. On Health Florida website in an article titled, “NFL player’s cardiac arrest spurs new wave of unfounded claims about COVID vaccines”, the following was written:

On the website “It’s not real research, but he quotes it as if it’s real research,” said Dr. Matthew Martinez, director of sports cardiology at Atlantic Health System in Morristown Medical Center. “Anybody can write a letter to the editor and then quote an article that has no academic rigor.”

In the same article it was further argued:

Though anti-vaccine influencers have insisted that sudden cardiac arrests during sports games are unprecedented, cardiologists say they’ve observed these traumatic events throughout their careers, and long before the COVID-19 pandemic.

“There have always been cases of athletes having sudden cardiac death or cardiac arrest,” said Dr. Lawrence Phillips, sports health expert and cardiologist at NYU Langone Health. “I have not seen a change in the prevalence of them over the last couple of years versus earlier in my career.”

So is WhyDr. McCullough and the many who agree with him, just a bunch of quacks espousing unfounded conspiracy theories? Why are they so quick to dismiss all of this out of hand without doing any additional research?

On the night of the game, it took a an independent thinker like Ben Swann to say what is not allowed to even be thought. It’s growing old that we are allowing science and medicine to be controlled by politics. Correlation never proves causation, but since 2020 there have been unprecedented cardiac issues among what appear to be otherwise healthy young men, some in prime physical condition. 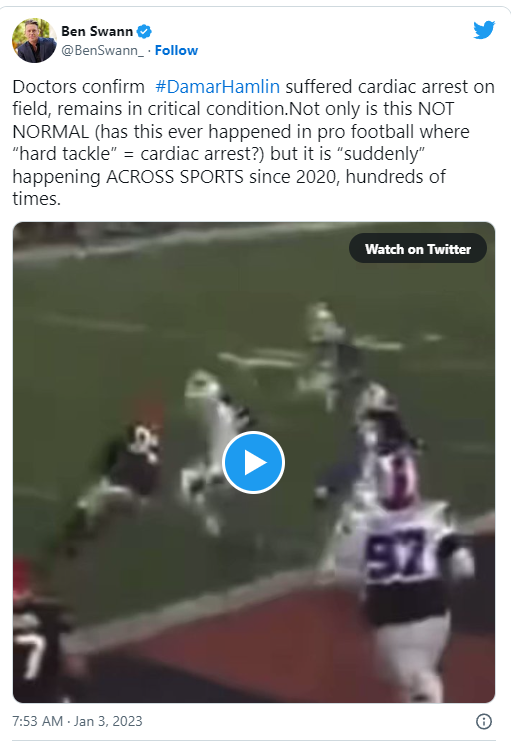 The truth is that none of us know what caused that cardiac arrest. And sadly, we may never find the truth if there was heart damage prior to the hit. It could have been a congenital heart defect. It could have been drug induced (legal or not). But the fact that not one commentator or physician dared speak of the sacrosanct mRNA vaxes as the possible contributing cause, is telling. And I believe it’s unhealthy that we have come to the place where politics controls debate, especially in medicine.

Much like the farce of manmade climate change, reaction to all things Covid (shots, masking, lockdowns and demonizing potential cures) are cultlike. It’s become a Covid Cult.

Science has been coopted by political ideology. There is no such thing as “settled science”. It is merely the observation of conditions which are later coalesced into theories. Often those theories are proved wrong when more data becomes available.

The bureaucrats told us certain things about the Covid vaccines and we believed them. Sure, I always had a healthy dose of skepticism but few believed they were doing anything intentionally nefarious. But now we know a great deal more than we did in December of 2020 when the vaxes were rolled out.

If hindsight is 20/20, I’m not convinced I would have taken the 2 Pfizer mRNA vaxes back in early 2021. With a very limited time to research and with such a dearth of available data, in an attempt to protect the vulnerable, I decided that it was prudent and loving to take the shots.

Since then we’ve been told one Covid lie after another. People were permanently suspended from Twitter and silenced on YouTube for daring to question the approved narrative that Covid was a freak of nature originating in the Wuhan wet market. It was even considered racist to call it the Wuhan or Chinese flu. But then again, everything is racist now days. Time Magazine just published a piece arguing that exercise is racist. I kid you not! https://nypost.com/2022/12/30/time-magazine-roasted-for-article-suggesting-exercise-has-racist-origins/

Now we’re relatively certain that Covid-19 originated in the Wuhan lab and that Fauci and Francis Collins (at the NIH) were doing everything in their power to cover their tracks. They blatantly lied to congress about doing gain of function research in Wuhan and I pray they’re soon tried for their many lies. We have learned from FOIA requests that $350m in royalties was paid to members of the NIH.

Then there was one vaccine lie after another. As we now know, the NIH, the drug companies, the FDA, and the CDC were all intentionally spreading misinformation while Twitter and the other big tech autocrats suppressed dissenting opinions (which they conveniently labeled as misinformation). If one dared challenge the potential dangers and/or the efficacy of the experimental vaccines, one was accused of being an accomplice to murder. The reactions were insane! And CNN, MSNBC and the rest of the left-leaning media treated the vaccines like the holy grail. The same with masking even though we knew early on that cloth masks were nothing more than a symbol of self-righteousness having little to no effect on the viral spread, though the CDC pretended otherwise.

Following are the big three vaccine lies. I say lies, not because they were later found to be untrue (which wouldn’t qualify as a lie), but because they knew they were lying at the time they were uttered. If we took the vaccines we were promised the following:

Dr. John Campbell, who has 2.6m subscribers, if one of the few to offer an objective analysis of the all things related to SARS COV2. Below he provides a reanalysis of mRNA trial data and it’s embarrassingly alarming.

So, why did they lie and continue to lie? Perhaps because the politicians don’t want to give up their power?

Though some of the more dubious anti-vaxer claims have been debunked that doesn’t mean that most of what we were told by leading experts were disseminating truth. They weren’t. And that’s why too many have lost trust in these regulatory bodies which are run by politically motivated bureaucrats. I have attempted to be fair-minded doing everything in my power to avoid confirmation bias. I would say that at least 70% of the experts I listen to are either self-proclaimed leftists or are centrists, so it’s not as if I’m only getting information from those whom I agree with politically. I will say that intellectually honest doctors like Vinah Prasad MD MPH, ZDogg MD, Paul Offit MD and Marty Makary MD, have helped partially restore my faith in the medical profession. From day one they have dealt fairly and honesty with the facts.

However, these men are by no means the norm. The majority of public health professionals have treated all things Covid like a political football? It’s been sadly pathetic to watch since science and medicine should be completely devoid of political ideology.

Dr. Robert Malone, a well known opponent of the experimental mRNA vaxes, was suspended by Twitter almost a year ago for “spreading misinformation and then recently reinstated when Musk began trying to right the Twitter ship. Though I don’t fall lockstep with Dr. Malone on all things mRNA, his voice and the voices of thousands of front-line doctors should not have been silenced. That’s what they do in communist countries. And, as it has turned out, most everything they were censured for was actually true. Most of what the MSM labeled misinformation a year ago has been found to be true.

Dr. Malone and the 17,000 physicians and scientist are now calling for the end of these experimental vaxes.

Pfizer and Moderna have raked in upwards of a $100B (which I don’t begrudge them for in terms free enterprise), and they have completely silenced dissent. The foxes are guarding the hen house and it has reached critical mass.

The next video from a year ago shows how Pfizer blackmails countries into submission. This is no conspiracy theory. https://youtu.be/nYIJxoh7gqw

This next video from the Hill’s Kim Iversen, regards the Pfizer Vax Docs which were court ordered to be released. Pfizer did everything in their power to delay the data dump. Why? What did they have to hide? Well, quite a bit. At the time of the video it was only after the first document dump. Without the court order Pfizer would have had 55 years to release the data. https://youtu.be/T0L360W5bc0

I couldn’t find the original montage since YouTube regularly silences free speech… so these are but a few of the Pfizer ads across the networks. https://youtu.be/QAkQlZgnbUQ If anyone thinks this ad revenue has no impact on MSM’s decisions to silence all dissenting opinion, they are naïve.

In closing, I pray that the young NFL star not only survives but goes on to have a successful NFL career. And I hope that his cardiac arrest was not due to any of the vaccines.

But, I unfortunately have little confidence that the truth will surface because truth has not exactly been the political machine’s strong suit. Let’s hope that as freedom begins to returns to Twitter (as the Twitter files continue to be released), that rigorous, productive debate will ensue. We simply cannot survive as a free people if we can’t question everything.

This entry was posted in Vaccines. Bookmark the permalink.