“We are opposed by a monolithic and ruthless conspiracy…” ~ JFK

Take a few moments to listen to this famous John F. Kennedy speech. In it, President Kennedy talks about secret societies, secret oaths, secret proceedings and a monolithic and ruthless conspiracy that relies on covert means to accomplish a grand scheme of world domination.

Questions abound. Was he speaking, as many presume, about the machinations of the infamous New World Order? Were shadow organizations like Skull and Bones, the Bilderbergers and the Illuminati, in JFK’s cross-hairs? Was he assassinated because he was exposing the NWO and it’s shadowy FED Reserve banking system?

Was Kennedy warning us of an impending anti-Christ led one-world government? Many believe that a cabal of rich bankers and megalomaniacs, who are secretly plotting and successfully engineering their plans of world dominion,  were directly responsible for JFK’s assassination. Watch this short video and draw your own conclusions as to whether President Kennedy was warning us of this impending NWO takeover or something else more pertinent at the time. JFK has been heralded as the man who exposed these nefariously intentioned globalists. Listen and decide.

Were you aware (as is pointed out at the end of the video) that this April 21, 1961 speech was actually 2,249 words, not just the 181 words that have been carefully edited to foster the above assumptions? Most are as shocked as I was to find that this speech had nothing whatsoever to do with exposing the Rothschilds, the CFR (Council on Foreign Relations) or any of the aforementioned clandestine players. Kennedy’s actual target? Sorry to disappoint you, but he was speaking of the inherent and imminent threat of Communism as the tensions were being played out in the cold war. Don’t believe me? Then listen to the entire unedited speech (below) – (for the text version click HERE).
When I first became aware of this dirty little secret propagated by conspiratorialists like Alex Jones, Edward G. Griffin, and Texe Marrs, I was really miffed. How dare these agenda-driven provocateurs attempt to dupe us into subscribing blindly to their paranoia at our expense and their financial gain! They’ve created quite a cottage industry. And the sad reality is that truth doesn’t sell nearly like sensationalism. So, since this myth fits neatly into our pre-programmed perceptions of a coming one-world government (promulgated by doom and gloom premillennial eschatology), most never bother to do any fact-checking. Christians have become a rather gullible lot.
So, why is this JFK matter important? Because it is one of the NWO conspiracy theory building blocks. If John F. Kennedy gave his life for the cause which conspiratorialists insist was the case, i.e. opposing the monolithic cabal of international “banksters”, then we, who love freedom, should be compelled to take action in fighting this grandiose beast. However, if JFK was actually speaking of the communist agenda, this changes the landscape a great deal. For context, the following is the entire unedited Waldorf-Astoria Hotel speech delivered on April 21, 1961 speech.
As with most conspiracies, certain things must be believed before other things, less demonstrable (coincidental anomalies), will become convincing. In other words, if the cornerstone of a theory is found to be riddled with major cracks, all the peripheral stones (anomalies) laid neatly atop the foundation can no longer be supported and thus the entire structure collapses. (So it is with most conspiracy theories, especially ones with a massive scope.)

Once the structure ceases to exist, the stones which appeared to have ominous meaning and purpose as part of the overall framework, become nothing more than random, isolated rocks strewn across the ground. And therefore, the beautiful conspiratorial edifice becomes nothing more than a pile of rather meaningless rubble. Such has been the case with the misuse and abuse of the actions and speeches of JFK.

What I have found is that most who think that JFK was warning us of an impending world takeover by these shadowy overlords, also subscribe to a host of other conjoined false flag conspiracies like:
1. 9/11 was an inside job
2. The Sandy Hook massacre was a hoax (complete with crisis actors)
3. The Aurora movie theater rampage was a hoax
4. The Boston Marathon bombing was a hoax (complete with crisis actors and fake blood)

Each of the above events, I am constantly told, were nothing more than false flag operations with the sole intent to turn the populous against our 2nd Amendment right to bear arms. And, over the past 13 years since 9/11, because the government bureaucracy has burgeoned while our freedoms have dwindled (this cannot be disputed), one need not wonder why people have become more suspicious, cynical and easily persuaded that “they” are out to get us.

So, after coming to the realization that this particular speech, and JFK’s presidency as a whole, was not centered around opposing the international bankers, the FED and all the exclusive organizations that are presumed to further their cause, have your presuppositions been compromised as mine were? I began to wonder how many other pieces of the conspiratorial puzzle may have been similarly manipulated? What other issues have been carefully crafted to cause us to buy into this kind of paranoia?

Listen, I’m not arguing that conspiracies are always confined to active imaginations, forever ordering facts to fit one’s predetermined paradigm. But what I am saying, is that I think we need to be more diligent to put, not only the establishment to the test, but also those who summarily oppose them. It must not be assumed that just because someone or some group is anti-establishment, that they don’t have agendas clouding reality.

Following is an interview that I found rather intriguing. Yes, both the interviewer and interviewee are decidedly left-leaning (to some this means among other things, untruthful, – and I reject this broad-brush assumption), but I think they expose an underlying narrative that is controlling the perceptions of many on the far right. These conspiratorial views of a nefarious worldwide cabal of evil Bond villains meld quite nicely with the apocalyptic beliefs of many Christians and because of this, we often scrutinize the building blocks of conspiratorialism far less than we ought. In other words, just because some movement opposes the establishment does not make those who do so decidedly and singularly altruistic. Follow the money and you will find that noted conspiracists (who congeal and coalesce everything into a monolithic agenda) have plenty of profit incentives no less than those they constantly attempt to demonize.

And, as a footnote, I think there ought to be a distinction between being part of the extreme right-wing and being a Libertarian. Standing for free markets and morality-based capitalism doesn’t mean one must necessarily subscribe to the conspiratorial paranoia. Though many libertarians are deeply embroiled in conspiracism (partly because of their distrust of the establishment), this should not, in my view, be an integral component of Libertarianism.

The “Protocols of the Elders of Zion” appears to be the script which many of the conspiratorialists like Alex Jones are reading.
I have learned to constantly confront my worldview with competing and opposing worldviews. It’s the only way to remain intellectually honest.
But the tendency is to do the opposite. We want to continually reinforce our beliefs, not challenge them. This produces fertile ground for the propagation of false narratives, basically connecting dots that are, in fact, unrelated. Watching the above video is an example of that process being played out. Though I don’t subscribe to very much of what these men believe, I have come to realize that we can learn a great deal from those with whom we disagree.

For a fuller discussion of this entire JFK issue, click HERE and HERE. The latter of these links deals with many JFK misquotes like the one below. 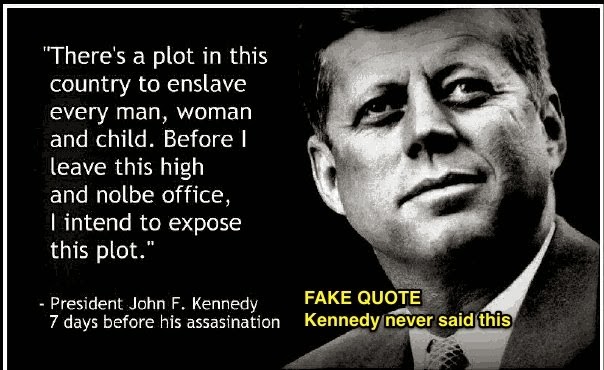 This entry was posted in 1967, Conspiracy Theory. Bookmark the permalink.