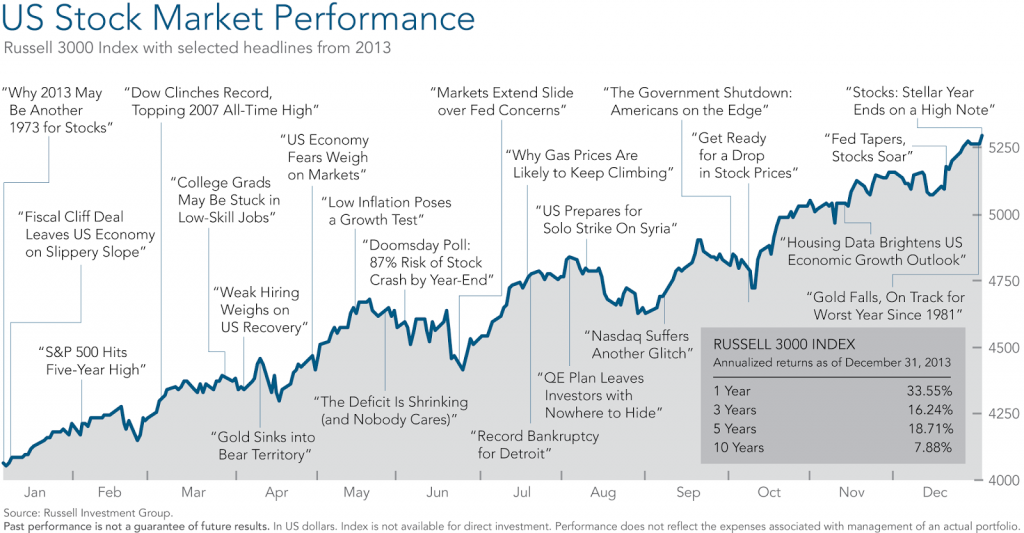 (click on the image for a larger view)
This chart says it all. Look at the headlines (you’ll have to click on the above chart for a larger view) that accompanied the 2013 Russell 3000 climb. The bad news was everywhere but look at the results. As they say, even broken clocks are right twice a day.
As 2014 dawned, the market went into a correction mode. Then we trudged through a 6% market correction with the possibility that another of even greater magnitude may be imminent. Who knows. But the point is that we need to listen to reason. Being intimidated by sensational headlines might be hazardous to your health. Being a realist means not ignoring negative signposts. However, that also means that one must take a comprehensive, balanced approach while not making decisions based upon ominous-sounding headlines.
In a recent article, “Crash of 2014: Like 1929, you’ll never hear it coming” (Feb 24, 2014), Paul B. Farrell, in his usual doomsday fashion, sounded the alarm. Could Farrell be right? Sure, even a blind pig finds an acorn once in a while. He’s listed a number of financial “experts” who agree that this bull run is over. Soros has apparently doubled down on a serious S&P decline.

But what happens if Farrell’s fear-mongering comes and goes with no crash? How many trillions will be lost if he’s wrong? All he wants to talk about are funds lost in a crash. He mentions the trillions lost in 2008 and early 2009. But if they hadn’t turned so frightful and stayed invested, they not only wouldn’t have lost but would have been rewarded handsomely.

Will Farrell ever own up to his prognostication if the sky doesn’t fall in 2014? Most of these guys don’t. They just wait in the wings before sounding their next alarm.

Be careful, be informed, but most of all don’t react emotionally. Fear and greed are not the stuff of sound decisions.

BTW, what happened to the plethora of impending crash predictions over the past twenty-five years? How long have they been predicting the U.S. currency collapse?

Back in 1991, financial guru Larry Burkett, in “The Coming Financial Earthquake“, predicted an imminent financial earthquake? What prompted such a godly, astute man, to make such a faulty prediction, which ended up negatively affecting the lives of untold thousands if not millions? Could the answer be rooted in Burkett’s gloom and doom eschatological presuppositions? The pervading negativity over western Christianity appears out of control. Clearly, we have serious economic problems, but are they truly insurmountable? It’s my view that this infatuation with the end of the world, which many believe is imminent, seems to be causing Christians to lose focus and subconsciously raise the white flag.

JANUARY 2018 UPDATE: After hearing nothing but doom and gloom over the past 4 years (actually it’s been never-ending), things have not panned out quite as badly as has been predicted. By the year-end 2013, the DOW was up 26.3% to a close of 16,576, which was the largest increase since 1995. However, 4 years later, with everybody constantly warning of impending collapse, the DOW is hovering just over 26,000. Who knows how long it will ride, but the fact is that many of the precious-metal doomsayers (many of whom have a vested interest in bear markets) have cost those who have heeded their advice a great deal of money. 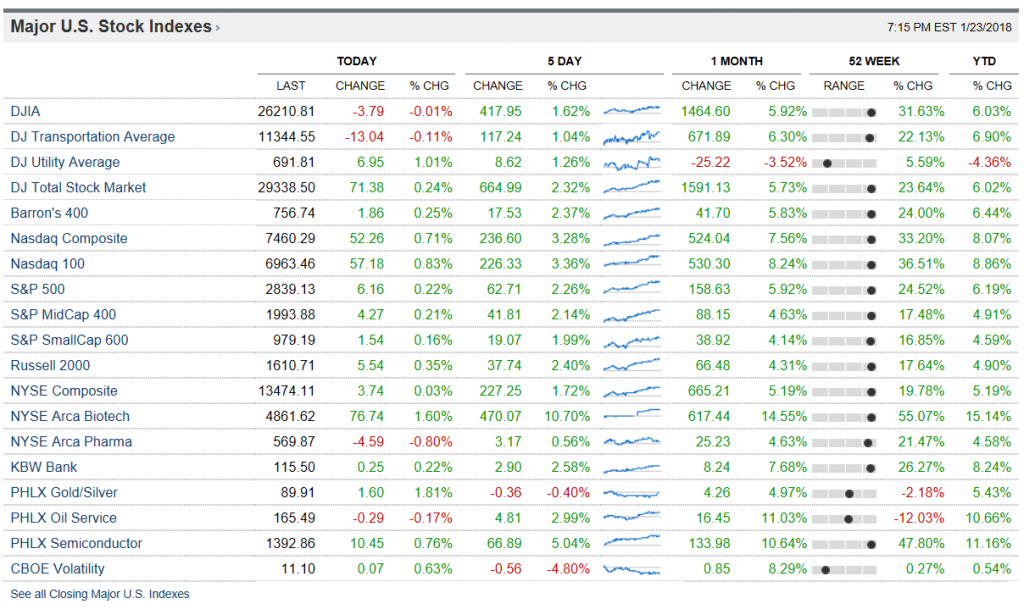 This entry was posted in Financial. Bookmark the permalink.