Peacemakers and the Land Promises…

“Blessed are the PEACEMAKERS for they shall become sons of God.” (Matthew 5:9)

This poignant exhortation, embedded in Jesus’ Sermon on the Mount, is often ignored in the larger context. People recognize their responsibility to seek peace with their “neighbor“, but when it comes to nations, Jesus’ mandate is summarily ignored. Why?  Why is there such a sense of detachment in terms of international foreign policy? Aren’t nations an extension of individuals? Why shouldn’t the United States be held to the same peacemaking standards?  Ron Paul was severely ridiculed for his anti-interventionist views, yet, in my opinion, he was merely attempting to apply Jesus’ peacemaking directive to nations.

As a perfect case in point, let me share a clip from a former presidential candidate and founder of CBN, Pat Robertson.

As you just heard, Robertson made it abundantly clear that any peace initiative involving land concessions (from Israel) to the Palestinians, “will result in terrible suffering for people in the United States“. He went on to sternly warn, “I think this is headed for disaster for the United States. God says, ‘They divided my land,’ there is something about dividing God’s land, He said this is ‘My land, I gave it to Abraham and his descendants and I don’t want it taken away from them and Jerusalem is the eternal capital of Israel.’“

Let me attempt to crystallize and unpack what I believe is Robertson’s serious theological error. He, along with the majority of evangelicals in our pulpits and pews today,  believes that Israel is above all. National Israel, it is argued, has been and always will be the apple of God’s eye. And if you doubt that for even a moment, consider the 1967 Israeli unprovoked attack on the USS Liberty. You will be shocked at the way this murderous act was swept under the carpet.

Christian leaders, in consort with their Jewish Zionist counterparts (contrary to popular understanding, plenty of Jews oppose Zionism), have brought great pressure upon the U.S. Government to apply standards not enjoyed by any other nation. And Robertson’s ominous rhetoric couldn’t make that clearer. We are admonished to “Pray for the peace of Jerusalem” (which is good), but yet at the exclusion of their neighbors. Why not pray for the peace of Tehran, Bagdad, and Damascus as well?  Because, John Hagee forcefully and defiantly says, they are NOT God’s people!  Matter of fact, they are deemed THE enemies of God in the “last days”. They were born on the wrong side of the genetic tracks and don’t think for a moment they aren’t fully cognizant of it.

Is Robertson correct?  Are the countries that encourage Israel’s land-swapping for peace, destined for God’s retributive judgment?  Is peacemaking conditional?  Is the modern-day nation of Israel exempted from Jesus’ exhortation?

I have neither the time nor the inclination to deal with all the Biblical ramifications regarding this very common theological position, but suffice it to say, I believe it is both dangerous and errant. Having said that, before you stamp 666 on my forehead and throw me under the bus, please take a moment to understand my position. By even questioning U.S. foreign policy toward Israel or Israel’s foreign policy regarding its neighbors, almost always elicits the race card.  Let me make clear, I am NOT anti-Semitic in any way whatsoever. I have many Jewish friends, a former classmate Israeli citizen, and so I want only the best for them. And that’s the main thrust of this article. What I believe Christians have unwittingly bought into, is the view that places one race above all others. I realize they believe they have good Biblical standing to do that, but as I will attempt to show, that view is built on rather unstable soil. So, I find it ironic that, at its very core, Christian Zionism is enmeshed in bigotry of the worst kind. It exalts an entire race of people solely on the basis of race.

Many if not most Christians believe it is our duty to support Israel in everything they do. After all, they argue, God gave them the “promised land” FOREVER, right?  And there is no shortage of Old Testament verses that appear to make that case.

Anyone even remotely familiar with the Middle East situation knows that peace in that region is a virtual impossibility without Israeli land concessions.  Therefore, if we take Robertson’s stance and faithfully apply the above passages, we are forever dooming the potential for Middle East peace.  The Dome of the Rock, Islam’s 3rd most holy site, has stood squarely in the heart of Jerusalem since 691 BC., and according to many, it will be destroyed with God’s blessing. Listen, I am no fan of Islam and believe it to be a very dangerous religion, but to insist that their holy site MUST be razed, proves my point.

In order to properly understand the above 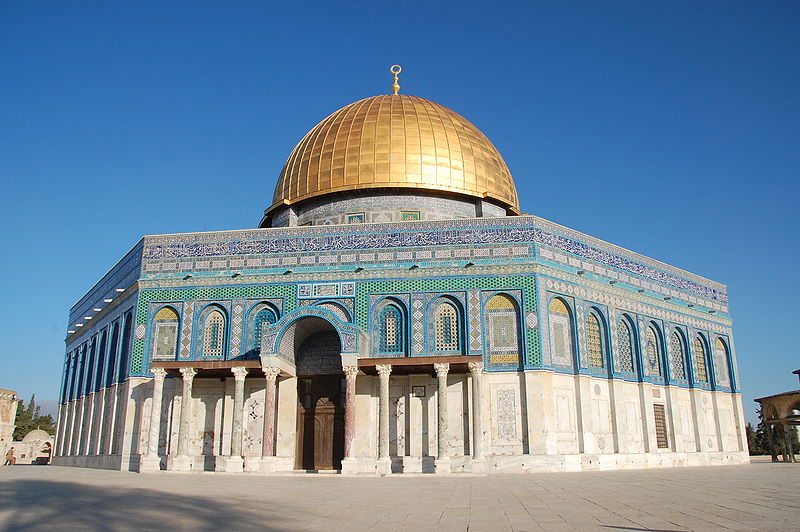 verses that seem to suggest Israel’s divine right to the holy land, I think it’s imperative to look at the Hebrew word Olam, which is most often translated, “forever”. Following is an excerpt from a debate regarding this very subject. Don K. Preston was challenging Dr. Ralph Olson’s contention which is the same as Robertson’s.

At this point you may be thinking as I initially did, how could anyone in their right mind contend that “forever” could mean anything other than “throughout eternity.”  Forever seems rather straightforward, right? In English it is, but let’s look at its Hebrew usage in context.

[Don K. Preston] “Mr. Olson reveals his ignorance of the Hebrew word “Olam”, which is translated as “forever”, when he demands that it must mean without end. However, I have already shown the following:

God would not abandon Israel, “UNTIL I have performed all I have promised” (Genesis 28:15f).

Mr. Olson claims that because God said He chose Israel “forever” that this proves his view of Revelation. No, it doesn’t. Take a look at a few texts.

In the Mosaic Covenant, the offering of incense (Exodus 30:6f), the Day of Atonement (Leviticus 16:1f), the animal sacrifices (Leviticus 10:1f), the Sabbath (Exodus 31:1f), and virtually every aspect of the Mosaic Cultus was said to be everlasting.

But, the reader will remember that Mr. Olson has already told us that the Mosaic Covenant was temporary. MR. OLSON, THE TEMPORARY MOSAIC COVENANT WAS AN “ETERNAL” (OLAM) COVENANT. But, this is not all. Take a look at this:

In Deuteronomy 28:46 part of the temporary Mosaic Covenant, YHVH threatened Israel with curses for disobedience to that covenant. He said of those curses —“And they shall be upon you for a sign and a wonder, and on your descendants FOREVER.” Mr. Olson, according to YHVH, the curses of the Mosaic Covenant would be upon Israel FOREVER!

In Jeremiah 17:4, Judah’s sin caused YHVH to say: “O My mountain in the field, I will give as plunder, your wealth, all your treasures, and your high places of sin within all your borders. And you, even yourself, Shall let go of your heritage which I gave you; And I will cause you to serve your enemies in the land which you do not know; FOR YOU HAVE KINDLED A FIRE IN MY ANGER WHICH SHALL BURN FOREVER.” Mr. Olson, God said that Judah’s sixth century sin would cause her to LOSE HER HERITAGE, because God’s anger would burn against her FOREVER! This is the curse of Deuteronomy 28, the curse that would remain on Israel FOREVER, for violation of the Mosaic Covenant, that you agree was temporary!

In Jeremiah 18:16, YHVH said that He was going to bring judgment on Judah, “To make their land desolate and a perpetual (OLAM) hissing.” Mr. Olson, is the land of Israel under this PERPETUAL CURSE?

In Jeremiah 23:39f, the Lord said of Jerusalem, “I will surely forget you and cast you out of my presence along with the city I gave to your fathers, and I will bring an everlasting reproach upon you, and a perpetual shame, which shall not be forgotten.’”

MR. OLSON, IS ISRAEL UNDER A PERPETUAL REPROACH as a result of disobedience to the MOSAIC COVENANT?

Mr. Olson can’t argue that this curse would be CONDITIONAL, for his definition of forever MEANS WITHOUT END! So, if the curses came on Israel, then the curses will never end!

In Jeremiah 25:9 YHVH said he was going to bring Nebuchadnezzar against Jerusalem, and make that city “perpetual desolations!” According to Mr. Olson’s definition of everlasting, this means that Jerusalem could never be restored, since God said she would be A PERPETUAL DESOLATION FROM THE TIME OF NEBUCHADNEZZAR!

So, according to God:

The Mosaic Covenant, with its cultus, would stand FOREVER.

The Mosaic Covenant CURSES would be on Israel FOREVER, she would be a PERPETUAL SHAME.

Jerusalem would– from the time of Nebuchadnezzar, be a PERPETUAL DESOLATION!

The fact is that olam does not necessarily mean without end, as Mr. Olson claims. YHVH said that in Israel’s last days, WHEN HE HAD FULFILLED ALL OF HIS PROMISES TO THAT NATION, He would– and He did– cast them off as a distinctive covenant people, because all of the “better things” that Israel foreshadowed, had arrived!

At this point, it should be clear that the Hebrew word “Olam” most often means, “for as long as God intends”.  Please take the time to watch the following two videos that will put Israel’s land promises in perspective.

Once we divest ourselves of the errant notions that Israel is above reproach and that the land of Palestine is eternally theirs to do as they please, we can begin to become peacemakers. First, obtaining inner peace through the shed blood of Christ, and then peace among nations, as we turn swords into plowshares. So, please let’s dispense with the notion that the little piece of real estate bordering Egypt, Syria, Jordan, and Lebanon, is attached to some sort of divine decree. Two thousand years ago in Jesus’ exchange with the Samaritan woman at the well, He made clear that the days had come when God would no longer be interested in physical locations.

John 4:21-24 Jesus said to her, “Woman, believe Me, an hour is coming when NEITHER IN THIS MOUNTAIN NOR IN JERUSALEM will you worship the Father. 22 “You worship what you do not know; we worship what we know, for salvation is from the Jews. 23 “But an hour is coming, and now is, when the true worshipers will worship the Father in spirit and truth; for such people the Father seeks to be His worshipers. 24 “God is spirit, and those who worship Him must worship in spirit and truth.”

Therefore, let’s us become ministers of reconciliation as we point people to the true and abiding temple, Jesus Christ. What would happen if we actually began to promote the Gospel without ethnic strings attached? What might happen if Muslims surrounding Israel, and those living within its borders began to realize that Jesus died for their sins?  And that they too can become the apple of God’s eye?

2 Corinthians 5:18  Now all these things are from God, who reconciled us to Himself through Christ and gave us the ministry of reconciliation,

We must, in my view, cease this bigoted view that one people group is superior to another. In the New Covenant, there is no distinction among races. The Gospel must be shared without prejudice as all Christians become peacemakers.

Colossians 3:11  a renewal in which there is no distinction between Greek and Jew, circumcised and uncircumcised, barbarian, Scythian, slave and freeman, but Christ is all, and in all.

Romans 10:12  For there is no distinction between Jew and Greek; for the same Lord is Lord of all, abounding in riches for all who call on Him;

This entry was posted in Israel, Zionism. Bookmark the permalink.