This has got to rank as one of my all-time favorites. Charming, witty and just plain good clean fun. How can anyone not like this movie? And it’s even that much more heartening knowing how much the cast enjoyed it and each other.

Most of the cast of The Princess Bride reunited on Good Morning America for the talk show’s “Totally Awesome ’80s Week.” “When the movie came out, it wasn’t a huge, huge hit. They couldn’t quite figure out how to market it,” Chris Sarandon, who played Prince Humperdinck, said. “They didn’t really know what they had.” When the film first opened in 1987, it grossed $206,243 in limited release during its opening weekend, according to Box Office Mojo. 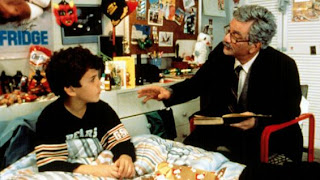 Cary Elwes, who played Westley, “I think when I die, they’ll say on my gravestone, ‘As you wish.’ I think every woman wants to hear that.” Wallace Shawn, who portrayed Vizzini, recalled people approaching him and wanting him to say, “Inconceivable.” Director Rob Reiner’s first choice for Vizzini was Danny DeVito.

The “MLT” line that Miracle Max says in the film, one of the most quoted, was ad-libbed on-set, Billy Crystal confirmed.

When asked about the final kiss at the end of the movie, Robin Wright, who played Buttercup, joked to Elwes, “Who are you?” The cast members also reminisced about Andre the Giant, who passed away in 1993.

Fred Savage and Mandy Patinkin were not present. (from The Hollywood Reporter)

(A bit longer version but with a 30 second ad preceding)
This entry was posted in Updates. Bookmark the permalink.