Love Our Enemies? You have got to be kidding!

Posted on October 25, 2011 by Chuck Coty
Are we truly the peacemakers Christ has called us to be?  Are we taking to heart the teachings of Jesus in the Sermon on the Mount? Do we love our enemies or would we prefer to bomb them into the stone-age?  Are we praying for those who persecute us or would we rather take retribution into our own hands? Do we turn the other cheek and return evil with good? Do we first check for the log in our own eye before pointing out the speck in other’s? You may answer affirmatively to all these commands, but I, on the other hand, find them contrary to my innermost being. What is Jesus’ way? And is it the way Christians have been taught to respond? 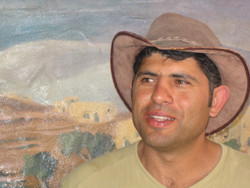 I find there’s a huge disconnect in the way we live personally and the way we expect our government to act. If our neighbor threatens us, do we immediately decide to blow up their home?  Yet, collectively, I believe we have adopted a rather unchristian retributive mindset. Why doesn’t our individual call translate to the larger context?

Listen to one man’s story of how he is living the Gospel of Christ.  He talks about “the Jesus way,” which translates into loving his enemies as he shares the love of Jesus. He is truly a minister of reconciliation.  My prayer is that this short film will touch you as it did me.

On Facebook and throughout the internet, I hear vehement opposition from Christians regarding President Obama’s decision to pull our troops from Iraq. Why?  Quite simple. Iran.  Iran, we are told is a a direct threat to Israel. Is that true? Consider myth #6 from 6 Myths you probably believe about America’s Enemies.  I don’t condone this writer’s use of occasional crass comments, and I certainly don’t consider him an expert on world affairs, but he makes some compelling arguments that are worthy of consideration. Nonetheless, doesn’t all this saber rattling toward Iran sound familiar? Isn’t that the way it’s been done time after time, country after country?

I sincerely don’t want these geopolitical arguments to usurp the attention I think this video deserves. I merely brought up because of the the way we have been conditioned to view the world. Anything either America or Israel does is right, fair and noble. Both nations are deemed models of altruistic virtuosity. But is that really the case?  How much do you really know of the Palestinian/Israeli conflict other than the fact you’ve probably been told that Palestinians are a bunch of dirty, suicide-bombing antagonists?

Surely, this is a very complex issue that find plenty of fault on both sides, but what you may not know is how the Christians within Palestine are and have been treated.

Many may be unaware that there are, and have been, Christians living in Palestine for generations. Daoud Nassar (the subject of the above video) is an Arab Palestinian Christian who lives on a small farm outside of Bethlehem. Each summer he hosts a creative arts camp for refugee children and teaches them to strive for peace in this region. Matt Carter interviews Daoud about his land, the difficulties he and his family are facing, and how his faith has characterized his life in tumultuous times.

For more information on Daoud and his organization please visit: www.tentofnations.org
This entry was posted in Updates. Bookmark the permalink.