Posted on June 14, 2010 by Chuck Coty
The truth behind the biggest environmental disaster in U.S. history – It’s not the conspiracy theory Alex Jones helped promulgate

I’ve received more than one email warning that this BP Oil disaster is not a solvable problem. This, I am told, is the wrath of God being literally poured out as the seas turn into blood. Following is from Dr. James P. Wickstrom, warning in “Oil Volcano Pressure Too Strong For Containment” that BP accidentally drilled into an underground volcano. 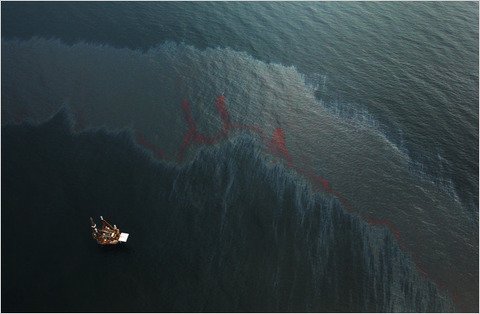 “It has been estimated by experts that the pressure which blows the oil into the Gulf waters is estimated to be between 20,000 and 70,000 PSI (pounds per square inch). Impossible to control. What US Scientists Are Forbidden To Tell The Public About The Gulf What you are about to read, is what the scientists in the United States are not allowed to tell you in great fear of the Obama administration.

They are under the threat of severe repercussions to the max.. Scientists confirming these findings cannot be named due to the above, but what they believe, they want to be known by all. Take a U. S. map, lay it flat and measure inland just the minimum 50 miles of total destruction all around the Gulf of Mexico as to what you will read below. The carnage to the United States is so staggering, it will take your breathe away.

Should what the scientists who are trying to warn everyone about be even close to being true… all of Florida will be completely destroyed as will everyone and everything on it.You decide!! Everyone has the right to read what I have just written in this article, as well as to what is written below by the scientists who the Obama administration and BP are trying to shut up.” (http://www.rense.com/general91/oilor.htm) PDF

What fosters this kind of paranoia? Why would a supposed expert (he may be but just based upon this leap of logic one wonders how committed he is to scientific inquiry independent of bias) jump to such wild conclusions? One can understand the grave concern over such a catastrophe, but making these statements without proof seems telling. Wikipedia (clearly, Wiki is NOT always accurate) has this to say about Dr. Wickstrom: “James P. Wickstrom is an American radio talk show host, Christian minister, white supremacist and antisemite who lives in Linwood, Michigan.”

The “white supremacist” and “antisemite” charges may be a significant overreach, but the fact that he’s a pastor and radio host speaks volumes about his proclivity toward sensationalism. Dr. Wickstrom and others with similar backgrounds cross-pollinate with Alex Jones because their paranoia fits his schtick like a glove. Wickstrom went on:

“SUMMARY OF EXPECTATIONS:  At some point the drilled hole in the earth will enlarge itself beneath the wellhead to weaken the area the wellhead rests upon. The intense pressure will then push the wellhead off the hole allowing a direct unrestricted flow of oil, etc.   The hole will continue to increase in size allowing more and more oil to rise into the Gulf. After several billion barrels of oil have been released, the pressure within the massive cavity five miles beneath the ocean floor will begin to normalize.

This will allow the water, under the intense pressure at 1 mile deep, to be forced into the hole and the cavity where the oil was. The temperature at that depth is near 400 degrees, possibly more.   The water will be vaporized and turned into steam, creating an enormous amount of force, lifting the Gulf floor. It is difficult to know how much water will go down to the core and therefore, its not possible to fully calculate the rise of the floor.    The tsunami wave this will create will be anywhere from 20 to 80 feet high, possibly more.

Then the floor will fall into the now vacant chamber. This is how nature will seal the hole.     Depending on the height of the tsunami, the ocean debris, oil, and existing structures that will be washed away on shore and inland, will leave the area from 50 to 200 miles inland devoid of life. Even if the debris is cleaned up, the contaminants that will be in the ground and water supply will prohibit re-population of these areas for an unknown number of years.”

This kind of junk science, based on a faulty reading of God’s Word, creates a “Last Days Madness” that permeates Christian circles. And it will continue to plague the Church while eroding the Bible’s integrity until we mute this shrill, misguided voices and figure out how to use sound hermeneutical principles to interpret the Bible.

Let’s bring sanity back into Christianity. I know people who were so convinced that the Dr. Wickstrom and the bevy of conspiracy theorists were right, who were in the process of trying to sell their homes and move out of Florida. One friend, a very successful businessman, was a hair short of apoplectic about the whole thing. This nonsense must stop! Those who spread the CTs are as guilty as those who start them.

This entry was posted in BP, Conspiracy Theory, Oil spill. Bookmark the permalink.