Has the Gospel Been Preached to All the World?

“And this gospel of the kingdom will be proclaimed throughout the whole world as a testimony to all nations, and then the end will come.”

Has this specific prophecy of the Olivet Discourse (Mt 24; Luke 21; Mk 13) been fulfilled? Most today contend that this is still a future hope. What do you think? Our presuppositions are so comprehensive and definitive that even considering this a viable question may cause us to reach for the Rolaids. “Of course it hasn’t been fulfilled!”, some bristle. “Just look around!”

Has the entire globe been permeated with the Gospel? What about the peoples’ of New Guinea or the indigenous tribes in the Amazon? Clearly there is a whole lot of work yet to be done, but is this truly the intent of Jesus’ bold prophetic proclamation? “Of course”, we say. What else could Jesus have meant by “throughout the whole world”? How much plainer could Jesus have spoken?

Well, let’s pause for a moment to consider that we’re reading translations, which means that the Hebrew (in the OT) or the Greek (in the NT) were translated into English. Sometimes there is translational loss moving from one language to another. For example, did you know that there are a number of different Greek words translated “world” by the KVJ? Kosmos, oikoumene and aion to name three. Do they all mean the same thing? As a matter of fact, they don’t. So, when we encounter the word “world”, since one English word accommodates 3 Greek words with different meanings, it’s very important to know which Greek word underlies the English translated word. 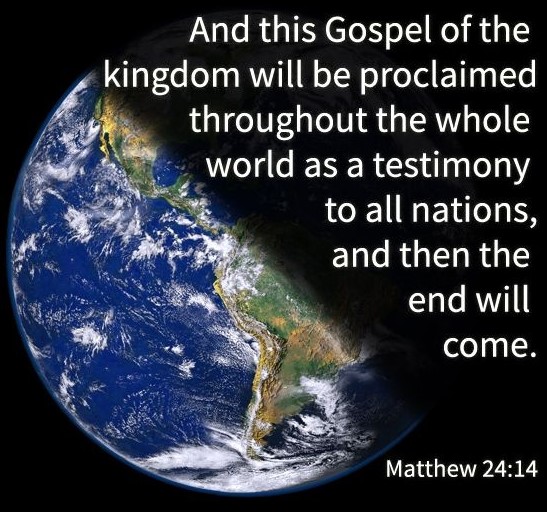 At first glance this sounds like a rather simple issue until we consider the fact that “world” appears 287 times in the KJV. For example, in the case of John 3:16, “For God so loved the world”, the word “world” was translated into English from the Greek word kosmos. Did you know that in Strong’s Greek concordance there are more than 8 potential definitions within the word kosmos not to mention the other Greek words translated world which I shared above?

So, if you read the KJV, remember that “world” may not necessarily mean exactly what you think it means. In the KJV, the “end of the world'” found in Matthew 24:3, is better rendered “end of the age” (as it is in all modern translations including the New King James Version (NKJV). Why? Because the Greek word “aion” (which means age) was originally incorrectly translated “world” in the KJV. And this has cause considerable confusion. Did you know that the phrase “end of the world” is not found in the entire Bible?

Let’s look at another example of “world” and how it may have added confusion to our understanding of the question at hand, “Has the Gospel been preached to all the world“?

Luke 2:1 (KJV) And it came to pass in those days, that there went out a decree from Caesar Augustus, that all the world should be taxed.

Is the above passage suggesting that the entire world was under the taxing authority of Rome? We know that wasn’t the case. Therefore, in this verse, just as in Matthew 24:14, Luke used the Greek word oikoumene for “world”. The NASB translation gives us greater insight into the word’s actual meaning by translating it “inhabited earth” i.e the Roman world.

Luke 2:1 (NASB) Now in those days a decree went out from Caesar Augustus, that a census be taken of all the inhabited earth.

According to an online Greek Lexicon, the word Greek word “oikoumene” can mean:

So, since context controls a word’s definition, we need to ask if the census decree went out to South America or to the Far East? Clearly not. The Scriptures are Jewish and since the NT is an extension of the OT, it must therefore be viewed in that context. Up until Acts 10, what had been Jesus’ stated mission and to whom was the early church sent to proclaim the Gospel?

This is the reason for Peter’s strange vision of unclean meat which he finally understood as the mandate to take the Gospel ministry to the Gentiles. “Rise Peter, kill and eat“. God was clearly admonishing Peter to go out to “all the world” (not just to the lost sheep) to preach the good news.

It’s clear that the trickle of living water flowing from the Temple in Ezekiel 47 was to eventually include the Gentiles. However, if the “all nations” exhortation of Matthew 28 (great commission) was at that time understood to include the Gentiles, then not only would Peter’s vision have been unnecessary but these devout disciples of Christ were derelict in their duties for at least the first 10 years of ministry.

Sometimes forgetting that these prophetic words were spoken by and directed to the Jews, can skew our perceptions such that we think these early commands were understood to be originally global in nature. As we hearken back to Caesar’s decree, neither “world” or “Roman Empire” was apparently intended to include every person on the planet. Not initially, that is. So, it should be noted that if we do not read the Scriptures with the understanding that it was written in the context of the Hebraic culture, then our misunderstanding may cause us to develop misguided conclusions.

Now, at this point let me head off some potential confusion. What I am not saying is that the Gospel was and is only for the lost sheep in the house of Israel (the Jews). There is no doubt that the Gospel, predominantly through the ministry of Paul, was to go to the uttermost parts of the earth i.e. “healing of the nations” (Rev 22:2) So, just because the prophecy was that the Gospel must go out to the entire Roman Empire does not in the least limit it’s scope today. Fulfillment then does not by any means refer to cessation now.

Having made clear that the Gospel’s proliferation is ongoing, let’s move on to the content in the chart below. Consider the following prophesied verses (chart’s left grid) and their corresponding fulfillments (right grid). I think you may be surprised to find the answers clearly embedded in each of the verses below. Admittedly, I was taken aback when this was first pointed out to me. The reality is that we don’t have to venture into subjective conjecture to answer the question, “Was the Gospel preached to all the world (o 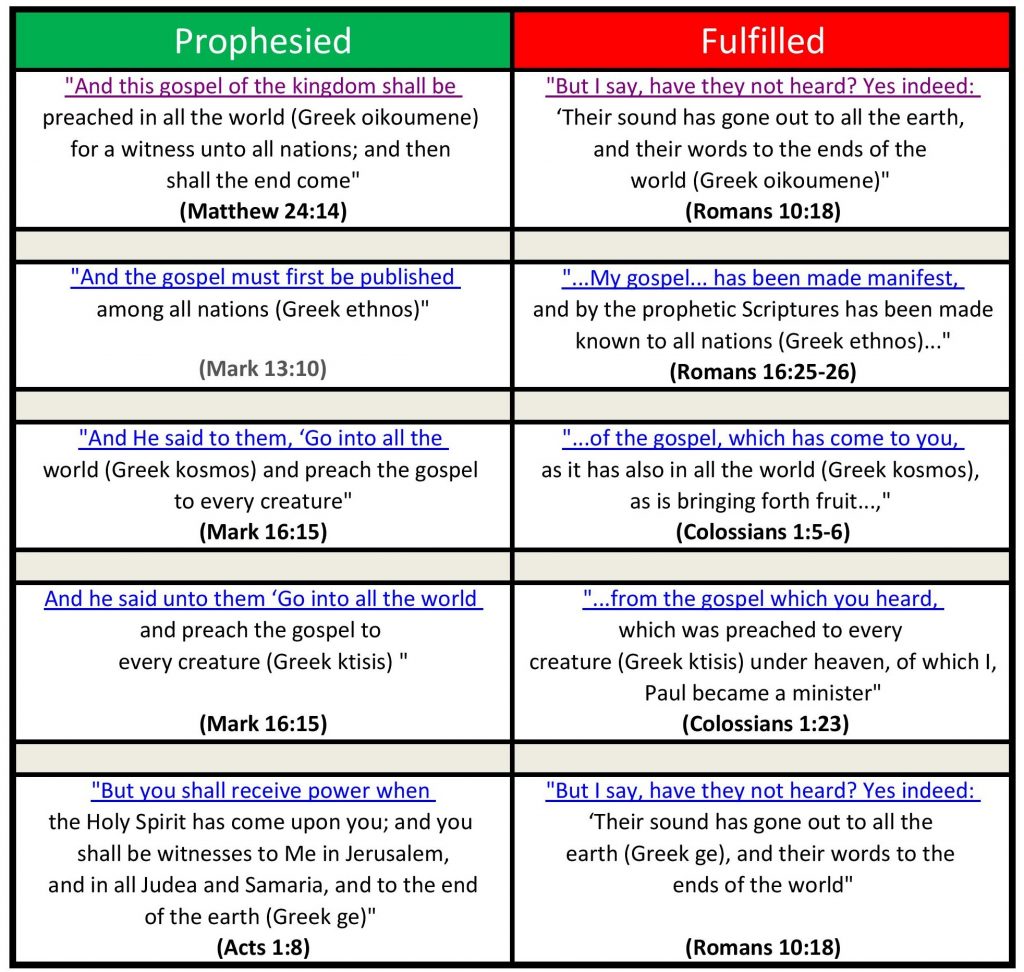 ikoumene)?”  This is quite astonishing!

The Scriptural evidence of fulfillment is overwhelming. How miraculously inspired is God’s Word? The object of each specific gospel proclamation prophecy contains a Greek word that shows its fulfillment using that same Greek word. For example, “world” is used as oikoumene in Matthew 24:14 and kosmos in Mark 16:15 and in their respective fulfillments, Romans 10:18 and Romans 16:25-26. Does that make sense?

The bottom line is that, much like the rest of Jesus’ prophetic words in the Olivet Discourse, “Truly I say to you [the disciples], this generation [not ‘that’ generation] shall not pass away until all these things take place” (Matthew 24:34) was fulfilled as predicted within “this generation” which was approx. a 40 year time period stretching from Pentecost to Holocaust [30-70 AD].

Some admit, after considering the concept of “audience relevance”, that the prophetic components of Matthew 24 did indeed come to pass between 30 and 70 AD. And that’s a great start. However, they contend that it must be fulfilled again sometime in our future.

The first question we should ask is, “Why?” What’s the point other than to meet our presuppositional expectations? What would lead any of us to believe that these fulfillments were mere shadows of future fulfillments? Is there one shred of Scriptural evidence to support this conclusion? We have developed a “Groundhogs Day” mentality without realizing that the revelations of the New Covenant are in fact the spiritual manifestations of the Old Covenant mysteries. (Col 1:25-26; 1 Cor 2:7; Col 2:2-3); Eph 1:9-10; Eph 3:5)

Again, our hope as Christians should be the worldwide propagation and proliferation of the Gospel. However, that hope has nothing to do with the fulfillment of Jesus’ specific prophetic proclamations in the Olivet.

The ensuing questions should be, “How can the Gospel be preached to “all the world” again?” (Matt 24:14) A little repetitive redundancy seemingly just to preserve our paradigm? How can ‘the end’ come more than once? (Matt 24:14) Let me reiterate. The “end of the age” was to come directly after the fulfillment of the Gospel being preached to all the world. Let’s look at the prophecy again.

“This gospel of the kingdom shall be preached in the whole world as a testimony to all the nations, and then the end will come.” (Matt 24:14)

And how can there be a two ‘great tribulations’, “such as has not been from the beginning of the world until now, no, and never will be.” (Matt 24:19)

It’s vitally important to know that Jesus’ promises are always on time, in spite of our sometimes faithless proclivities to perpetually and perhaps unintentionally believe otherwise! I’m not casting stones here. I was in the same eschatological boat as many not very long ago. However, when someone threw me a lifeline, I decided to use it. It’s great to get back in the boat! Things are making a whole lot more sense now. God’s Word is truly amazing!

In the chart below you will see that however Paul understood Jesus’s use of “oikoumene”, he clearly believed it was fulfilled (according to Romans 10:18).

Thanks to Keith for putting the following video together…

This entry was posted in Eschatology. Bookmark the permalink.

42 Responses to Has the Gospel Been Preached to All the World?